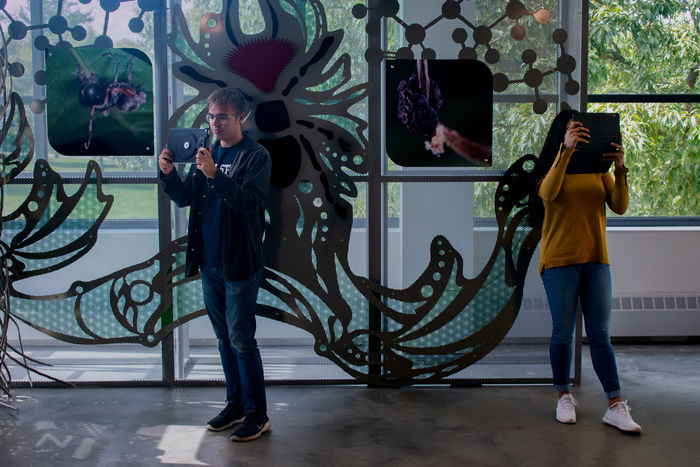 The new augmented reality exhibition has arrived at Penn State Berks and it sounds like something out of a science fiction movie. In reality, the ‘Zombie Ant Experience’ is part interactive art installation, part teaching tool that illustrates spore trajectories. Visitors are transformed, through augmented reality, into ants, living beneath the forest canopy. They are soon attacked by a simulated fungus, which turns them into “zombie” ants. The exhibit is the result of a collaboration between an artist from the Greater Reading area and a Penn State professor.

Penn State Berks will host a public reception for the ‘Zombie Ant Experience’ on Tuesday, Oct. 20, 2022, from 3–6 p.m. in room 107 of the Perkins Student Center. The event will feature Huck Sci-Art Group Director Daryl N. Bradford and Senior Research Artist Talley Fisher, who will introduce the Penn State Berks community to their interdisciplinary project. The team will outline the history, process, and evolution of the project, as well as demonstrate the interactive augmented reality component. There will be a brief Q&A following the talk. This event is free and open to the public and light refreshments will be served.

The exhibit was installed at Penn State Berks in August 2022 and will remain in place for a year. Visitors can download the 'Zombie Ant Experience' app from the Apple store to experience the augmented reality component.  The college will also make iPads available for viewers to borrow during the exhibit.

The ‘Zombie Ant Experience’ explores the research of Penn State professor of entomology and biology David Hughes, who studies the effects of a fungus that infects living ants, takes control of their muscles, and forces the ant to become a mindless zombie ants driven to help spread the fungus to take over even more ants. 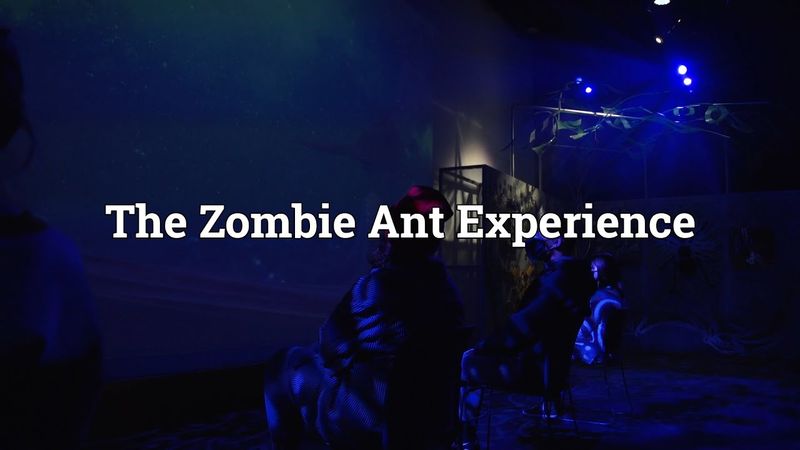 The Zombie Ant Experience is the pilot project of a new series of science/art collaborations produced by the Huck Institutes of the Life Sciences, viewers of The Zombie Ant Experience are immersed in the life cycle of the zombie ant fungus through a 4D traveling installation. This short video showcases the installation while it was at Penn State Harrisburg, in the Kulkarni Theatre.

Hughes, who is now the Dorothy Foehr Huck and J. Lloyd Huck Chair in Global Food Security at Penn State’s Department of Entomology, reached out to Daryl Branford, director of Science-Art Initiatives at the SciArt Group at the Huck Institutes of Life Sciences, to find a way to bring his research to life.

Branford knew that this research had the potential to capture people’s imagination, and he brought together an interdisciplinary team of engineers, architects, computer scientists, artists, and others to bring ‘The Zombie Ant Experience’ to life. The result? An intricate metalwork sculpture that details the life span of the fungus and the infected ants, complete with an augmented reality overlay that lets visitors step into the world of the zombie ants on their own terms.

“We’re pulling back the curtain on an invisible world that’s happening around you all the time,” Branford said in an interview. “People should be excited about science; it’s a part of our everyday lives. And this project is taking this amazing science and bringing it to the public in a very tangible, very exciting way.”

Branford brought in Talley Fisher, then a senior research artist at the SciArt Group. She used aluminum to create the metal elements of an interactive sculpture. The biggest challenge, Fisher said, was to design ways to visualize complex scientific processes. The team used 3D animation and augmented reality to immerse visitors in a biological process.

The sculpture wall is 12 feet long and more than 13 feet high. It took nearly six months to design and another four months to fabricate and install for the first exhibit, in 2018. Since its initial run at Penn State’s University Park campus, the Zombie Art Experience has traveled the commonwealth. In the process, the sculpture also has evolved.

In addition to blending art and science, the installation draws on different academic disciplines, including architecture, engineering, and computer science. All share a common denominator, Branford said: creativity.

“Art and science are not mutually exclusive,” he said. “By communicating science through the arts, research is more accessible and capable of reaching a wider audience.”

The Zombie Ant Experience will be open during normal business hours in Penn State Berks Perkins Student Center through August 2023. There is no fee to independently explore the sculpture, which is open to the public, and reservations are not required.