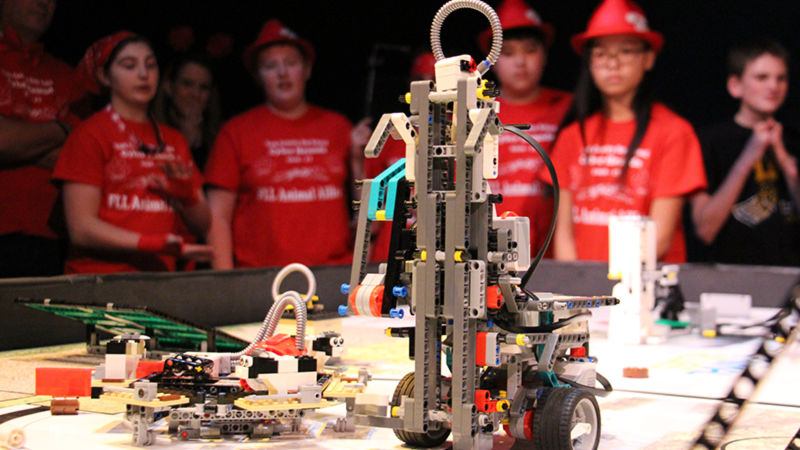 Penn State Berks faculty, staff, and students, as well as volunteers from the local community, helped to run and judge the tournament and referee the robot competition.

Approximately 170 students from across 19 central and northeastern Pennsylvania counties had the opportunity to showcase their months of hard work during the inaugural FIRST LEGO League competition, hosted by Penn State Berks on Saturday, Jan. 21, 2017.

Twenty-three teams of kids age 9–14 (fourth-eighth graders), along with 58 adult coaches, dedicated hundreds of hours over the last few months to creating and programming autonomous LEGO robots that performed a series of complex tasks while attempting to solve real-world science and technology challenges.

This season's FIRST LEGO League competition challenge was Animal AlliesSM. For the Project, each team was tasked to identify a problem that occurs when animals and humans interact; create an innovative solution that made the interaction better for animals, people, or both; and share their solution with others. Through their participation, children develop valuable life skills and discover exciting career possibilities while learning that they can make a positive contribution to society.

Kathleen Hauser, instructor in engineering at Penn State Berks who coordinated the event, explained that each challenge, based on a real-world scientific topic, has three components: the Robot Game, the Project, and the Core Values. Teams of no more than 10 students each, each with at least two adult coaches, participated in the challenge by programming an autonomous robot to score points on a themed playing field (Robot Game) and developing a solution to a problem identified by the challenge (Project), all guided by the FIRST Lego League Core Values.

The first place Champion Award for the competition went to a team named Lehighbots, comprised of five kids ages 9–11 from Breinigsville, Lehigh County, who tracked a high-tech solution to the honeybee crisis working with a hobbyist in Kutztown to an expert at Washington State University.

Igutech, a team from Bethlehem that studied the mite that most commonly causes colony collapse disorder in bees, took the second place Champion Award. They developed a prototype that uses a semiochemical to lure the mite into a trap that will be tested at Kutztown University later in the spring semester. Igutech was also honored with the Robot Performance Award.

In addition, the Coach/Mentor Award, which recognizes the individual whose leadership and guidance best exemplifies FIRST LEGO League core values, was presented to Matt Franchina of the Palmyra Middle School. The Penn State Berks Volunteer award, recognizing the time and effort invested in the tournament, went to Roy Thompson,
Supervisor of Mechanical Engineering Labs.

Penn State Berks faculty, staff, and students, as well as volunteers from the local community, helped to run and judge the tournament and referee the robot competition. In future seasons, the region will have both qualifying tournaments and a final championship tournament.

Snapology, which provides interactive STEAM (science, technology, engineering, art and mathematics) activities for children in the Reading area, approached Penn State Berks about partnering with FIRST (For Inspiration and Recognition of Science and Technology) to bring a local FIRST Lego League competition to Berks County. Snapology provided a space with a competition table for teams to practice with their robots. They also offered mentoring sessions to help teams learn the aspects of programming and robotics using Lego Mindstorms. Until last fall, the closest opportunity for students to participate in the FIRST Lego League competition was in Philadelphia.

Hauser said that Penn State Berks students learned the value of sharing their time at an event that engages children in the community in a STEAM activity. “We are engaging our youth in the science, technology, engineering, arts and math fields and having a whole lot of fun doing it,” said Hauser.

She adds that they hope to double the number of teams competing next year at the college. She expects the 2017-18 contest to feature multiple qualifying events as well as the regional championship.

Penn State Berks education instructor Guadalupe Kasper, coordinator of the Penn State Educational Partnership (PEPP) Program, is planning to offer sixth- and seventh-graders from Northwest, Northeast and Southern Middle Schools in Reading the opportunity to enter next year's competition through a grant that she received for First Lego robot. PEPP is an early-intervention collaboration between Penn State Berks and the Reading School District. The program provides college students as mentors for an after-school, college-prep program in the Reading School District.

Kasper said the competition will help her younger students develop technical skills and team-building techniques. Along with faculty from the college's Engineering, Business and Computing division, she's recruiting college students to serve as coaches.