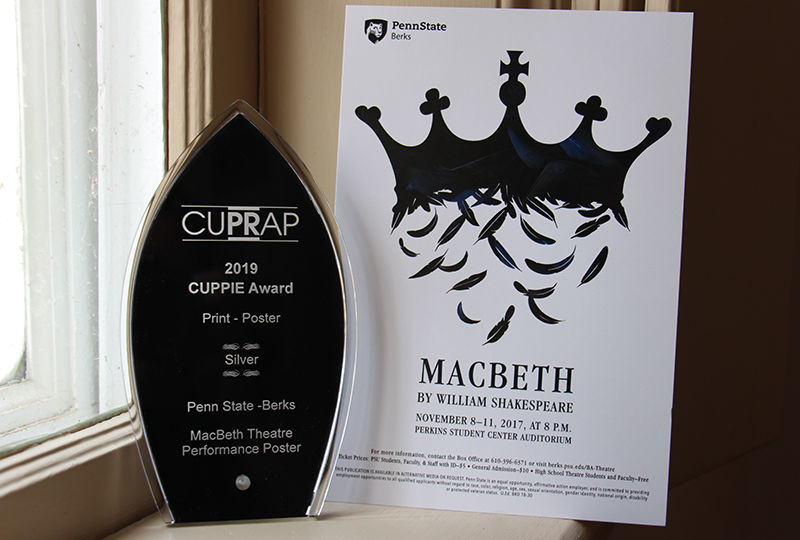 At the 2019 College and University Public Relations and Associated Professionals (CUPRAP) Awards Ceremony, the Penn State Berks Office of Strategic Communications was presented with a Silver CUPPIE Award in the Poster category for their "Macbeth" Theatre poster.

Behind the creation and design of the poster was Visual Communications Specialist Katie Quinn, who works closely with the Theatre Department to create posters that capture and celebrate their productions. Jim Brown, program coordinator for theater at Penn State Berks, often encourages students and faculty to create unique spins on the plays the college produces, giving Quinn a chance to create playful conceptual designs. 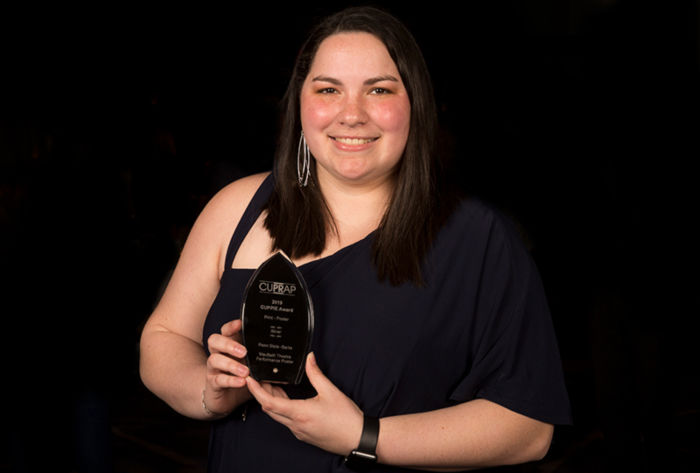 In the case of "Macbeth," it was Brown and Cory Palmer, instructor in theater, who focused on the concept of temptation and renamed the play’s notorious witches as “enchanters.” They approached Quinn with this new perspective and explained that they planned to have the enchanters dressed as birds, wearing colorful feathered scarves.

“This idea of ravens or crows kept popping into my head, and since "Macbeth" is such a tragic story, I decided to explore it,” Quinn explained. “I wanted it to be recognizably "Macbeth"--something dark, enchanting, and tragic, but it also needed to be unique to the version that Jim [Brown] and his team were creating.”

Quinn designed a minimalist poster featuring a black crown disintegrating into feathers. Upon closer inspection, the crown is revealed to be made of feathers, alluding to the fragility of Macbeth’s rise to power and dependence on the enchanters, as well as Macbeth’s eventual downfall.

This award comes on the heels of a Bronze CUPPIE awarded to the Penn State Berks Office of Strategic Communications in 2018 for their 2017 Blue & White Magazine cover.

The awards ceremony was held on March 14, during the spring CUPRAP conference. For the 2019 competition, there were 416 entries received from colleges, universities, agencies, and providers of private, specialized and secondary education in Delaware, Maryland, New Jersey, New York and Pennsylvania. A total of 34 institutions were recognized for their work. The competition is judged by industry professionals who have no vested interest in the institutions nor the work submitted.

About CUPRAP
CUPRAP is a nonprofit organization of communications professionals from colleges, universities and independent schools dedicated to advancing the understanding of higher education and enhancing the professional development of its members. CUPRAP members work in public relations, media relations, marketing, publications, sports information, web and graphic design, and related areas. Members come from private and public colleges and universities, junior colleges, community colleges, independent schools, as well as other organizations involved in higher education. Founded in Pennsylvania in 1980 as one of the nation’s few statewide organizations, CUPRAP members now come from many states. Today, CUPRAP has nearly 350 members from 100 institutions.