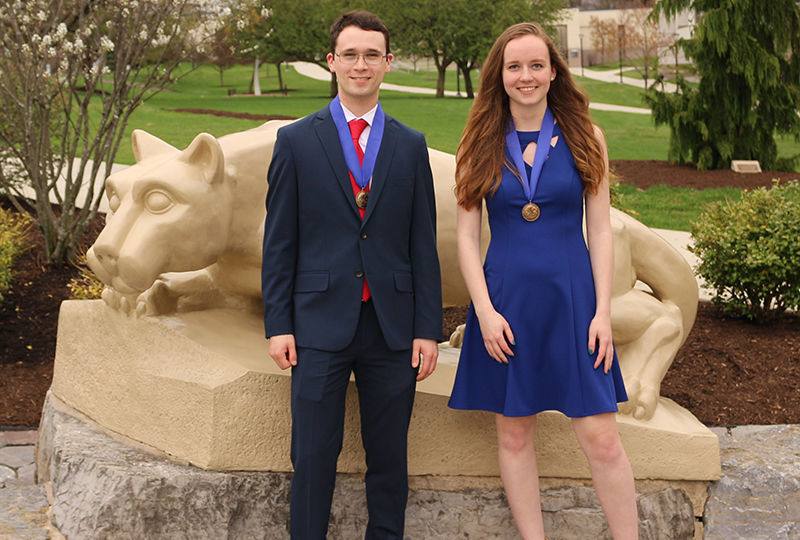 WYOMISSING, Pa. — Two members of the Penn State Berks graduating class were honored for their research and received Schreyer Scholar Honors Medals at the Academic Achievement Awards Ceremony held on Sunday, April 14. Medals are awarded upon completion of the requirements of the Schreyer Honors College, including a capstone honors thesis.

Awardees included Bridget Baksa, for her thesis titled “MOSCH: A Multi-Objective Spatial Clustering Algorithm with Constraint-Handling Methods” and Ryan Morris for his thesis “GIG-Economy Investigation: A Study of Ride-Sharing Perceptions and User Experiences.”

“A common problem with bike-sharing programs is managing the inventory of bike stations, since a bike can be rented at one place and dropped off at any other station,” explained Baksa. “By clustering bike stations based on their distance from one another and the number of bikes entering and leaving a station, regions can be created that have similar proximity and traffic. These regions' inventories can be better managed since bike traffic is balanced.

“Another application area of the MOSCH algorithm could be to cluster congressional district regions based on constraints such as demographics and political parties to create compact and unbiased districts," said Baksa. "The MOSCH algorithm could also be used to research market demographics to determine the best areas to place stores and shopping centers. Market clusters can reveal similarities in consumer interest and therefore determine where demand for a certain product or brand would be the greatest.”

Meanwhile, Morris, a business major with a minor in entrepreneurship and innovation, explained that his research explores the perceptions of ride sharing and user experiences, investigating perceived usefulness, ease of use, and risk as determinants of technology acceptance in the ride-sharing market. He stated that an important feature of the study is its attention towards non-users as well as the experiences of users. Understanding the determinants of passengers’ and drivers’ intentions to use ride-sharing is critical to promoting and adapting the service.

He explained that, contrary to expectations, the results of this study indicated perceived that usefulness and ease of use have no statistically significant effect on intention to use ride-sharing services. Perceived risk, however, does seem to be a significant determinant of ride-sharing application adoption. Based on the results of this study, implications for businesses and suggestions for further research were provided.

“Ride-sharing has attracted a great attention in the past five years and is one of many available transportation options. Some of the applications for this research include guidance for marketing campaigns within the gig-economy sector, a pathway for future studies on technology adoption, and recommendations for Uber and Lyft on how to address perceived risk for potential passengers and drivers,” Morris stated.