The award, said Brennan, the leader of the project, is a way to open the door to building interest in WEF-related issues at the University.

Penn State is already an integral part of the Africa WEF Network, which began at a workshop held at the International Institute for Tropical Agriculture (IITA), Ibadan, Nigeria, in 2018. The network, which consists of more than 100 partners from Africa, Europe and the United States, focuses on the interconnected nature of Water, Energy and Food issues — what is referred to as a “nexus approach.”

This particular project brings together faculty and students across Penn State’s campuses, institutes and centers for a common goal: to evaluate and test ways to find sustainable WEF practices. Ethiopia was a logical starting place, said Brennan.

“We decided to start in Ethiopia because it faces acute WEF systems challenges across several different agroecological zones, which facilitates comparisons within one country,” Brennan said. “But we’re not focused solely on Ethiopia. Our researchers are working on WEF-nexus issues around the world.”

Brennan came to the WEF nexus through her work with Penn State’s Eco-Machine and duckweed, a unique plant that embodies the potential of utilizing integrated systems to meet fundamental human needs for clean water, renewable energy and nutritious food.

“Duckweed can absorb nutrients from water and leave it cleaner than before,” Brennan explained. “It can then be harvested and used in regenerative agriculture, fed to livestock, or used to produce eco-friendly biofuels.”

Brennan’s main focus these days is the Drawdown initiative — a strategic plan to reduce greenhouse gas emissions and reverse global warming. Penn State will be hosting a Drawdown conference in mid-September in State College, Pennsylvania.

“Water-Energy-Food is intrinsically linked with drawdown,” she said. “For example, refrigeration is one of the most energy-consuming activities on the planet, which obviously has a great impact on global warming. This link has far-reaching implications, especially if we’re trying to feed billions of people.”

For Jacobson, work in Africa is second nature. He has done teaching, research and service all over the continent, from timber conservation in his home country of South Africa, to transforming croton nuts into fuel in Kenya. Because of this vast experience, he has taken the role of director of the Africa Water-Energy-Food Network at Penn State.

Eventually, Jacobson (and the rest of the team on the project) hopes to have dozens, if not hundreds, of Penn State faculty involved in WEF activities — “Like the Global Engagement Network, but broader,” Jacobson said. 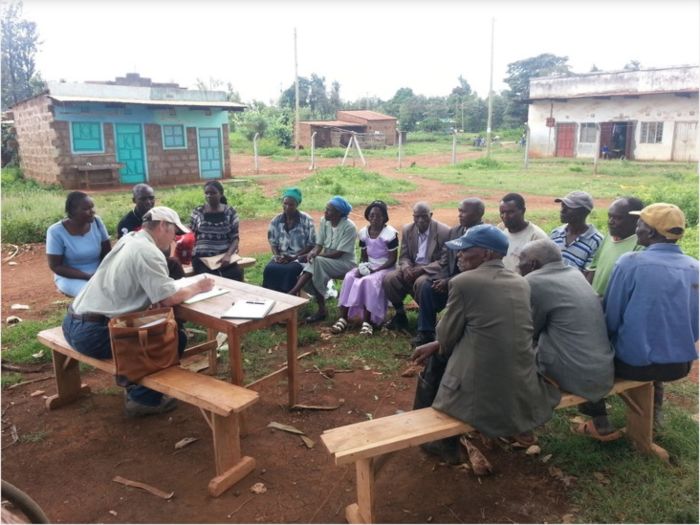 Penn State researcher Michael Jacobson surveyed small-holder farmers in villages across four counties in Kenya about their willingness to grow croton trees. He asked them such things as how many trees they have, whether they would be willing to plant more, and whether they would gather the nuts and provide them to a biofuel-making company at collection points and, if so, at what price.

Thiede, a rural sociologist and demographer, views the project as a continuation of his research into the impact of climate change on human populations.

“I am particularly interested in how climate change is impacting food and water systems,” said Thiede. “You cannot think about development, about improving the lives of people, without thinking of all three systems — Water, Energy and Food — in an interconnected way.”

His previous work garnered him the Roy C. Buck Faculty Award in 2017 for his paper, “Climate variability and inter-provincial migration in South America, 1970-2011.” In it, he and his co-authors analyze how temperature changes impact human migration patterns. Thiede will be taking leadership on case studies in three distinct agroecological zones in Ethiopia.

Part of the project proposal includes activities in Pennsylvania, such as work in Berks County with researchers from Penn State Berks. The program at Berks will be used as a pilot for the larger Ethiopian project, and enable transdisciplinary, cross-college and cross-campus collaboration.

A smallholder farm in Ethiopia.

“We believe that transdisciplinary teams are the only way to achieve real, lasting solutions to these complex sustainability challenges,” said Brennan. “We can’t come at this piecemeal. We need to engage faculty, staff and students from all areas to work together with local communities to develop appropriate strategies.”

“No one’s an expert on all three areas,” Jacobson added. “That’s why we need to work together.”