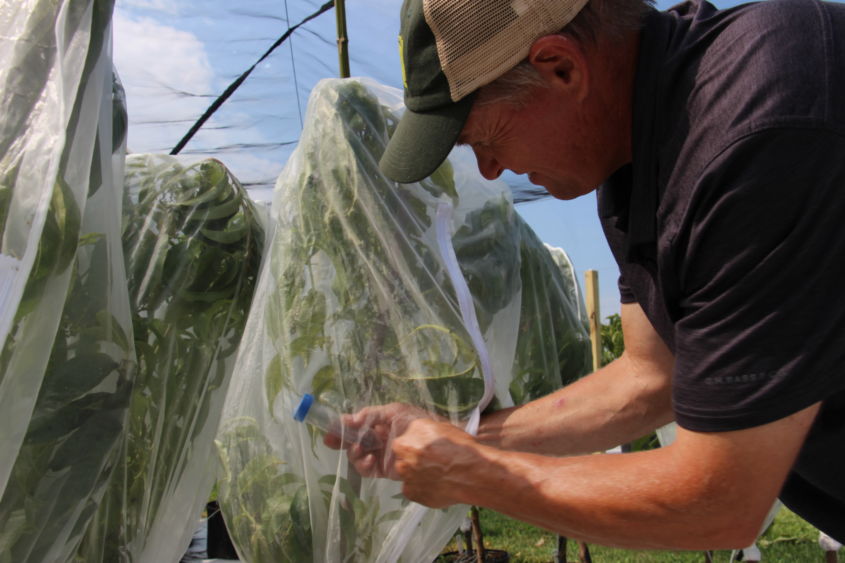 John Rost, lab supervisor for biology and horticulture, is pictured treating plants with a compound to kill spotted lanternfly at the Penn State Berks Center for the Agricultural Sciences and a Sustainable Environment.

Fungus found in Berks County has potential to be the answer
Lisa Baldi
August 27, 2019

READING, Pa. — This summer, the Center for the Agricultural Sciences and a Sustainable Environment (CASSE) at Penn State Berks became "ground zero" for the research of organic and conventional methods to eradicate the spotted lanternfly (SLF). The CASSE, centrally located in the heart of Pennsylvania’s SLF quarantine zone, is one of the primary research sites studying methods of controlling the invasive pest through a Pennsylvania Department of Agriculture grant.

Recently, researchers from Penn State Berks, the College of Agricultural Sciences, Penn State Extension, and Cornell University came together after a previous Cornell-led study showed that two fungi, Batkoa major and Beauveria bassiana, were decimating SLF in the woods of Berks County, near the Pagoda.

These fungi cause disease in insects but are harmless to humans. When a SLF encounters these fungi, it picks up fungal spores, which germinate and colonize the body, killing the insect in days. A telltale sign of fungal infection is a white fuzz that emerges from the cadaver days after contact. That fuzz, in turn, contains more spores that can infect other insects.

Researchers in the College of Agricultural Sciences at University Park reached out to Michael Fidanza, professor of plant and soil science and director of the CASSE at Penn State Berks, for support in a project studying the two fungi and their effects on the spotted lanternfly, over the summer months. Fidanza was eager to agree and provided use of Penn State Berks campus facilities and equipment for the study. In addition, David Sanford, associate professor of ornamental horticulture at Penn State Berks, allowed the team to use his research lab and part of the shade house.

"We are happy to support this important investigation on the SLF epidemic," said Fidanza. “This is a good example of collegiality between Penn State Berks and Penn State's College of Agricultural Sciences.”

At the CASSE, much of the field work for the center’s various lanternfly studies is being conducted by John Rost, lab supervisor for biology and horticulture, along with two graduate students from Penn State University Park. They are joined a few times a week by other members of the research team.

Lycorma delicatula, commonly known as the spotted lanternfly, is an invasive insect that first arrived in Berks County from Asia in 2014. Since that time, the infestation has spread to 14 southeastern Pennsylvania counties and neighboring states, including New Jersey, Virginia, Maryland and Delaware. In the last five years, the SLF has had a devastating effect on Pennsylvania’s grape, tree-fruit, hardwood and nursery industries, which collectively are worth about $18 billion to the state's economy.

“This pest affects a lot of different industries and we’re really struggling to control it,” explained Heather Leach, spotted lanternfly extension associate in Penn State’s College of Agricultural Sciences. Leach compared the spotted lanternfly to a large aphid or a mosquito that sticks its straw-like beak into a plant and sucks out the sap. By doing so, it depletes all the plant’s nutrients.

Leach explained that the pests also excrete a sticky substance known as "honeydew," which attracts other bugs and black sooty mold. To make matters worse, the spotted lanternfly has no natural predators or parasites in the United States.

In fact, spotted lanternflies have become such a problem that the Pennsylvania Department of Agriculture has issued a quarantine for the state’s 14 infested counties, requiring inspection of vehicles, trailers and other equipment before leaving the quarantine zone. 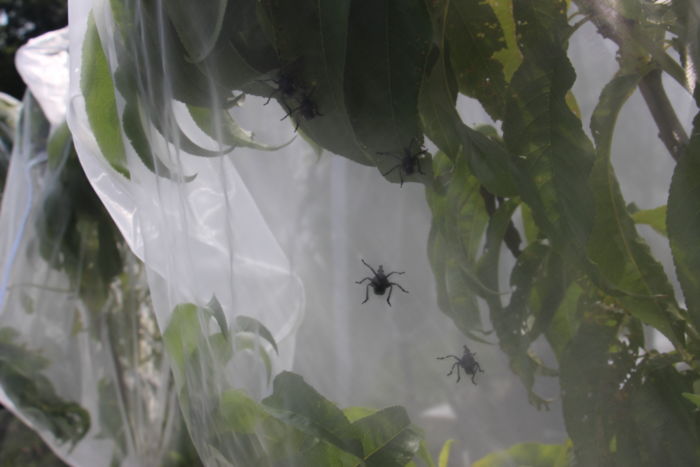 SLF nymphs were placed on the trees and plants and 48 hours later, researchers checked to assess mortality.

The CASSE, which is easily accessible for researchers from other states who are participating in the study, is one of the primary locations for SLF research studies.

The group is testing and evaluating the fungal agent Beauveria bassiana, as well as various organic and conventional commercial insecticides.

Beginning in July, researchers set plots in Norristown Farm Park, a 695-acre county park in Montgomery County, Pennsylvania, where dense populations of spotted lanternfly nymphs were observed. The plots included both a control group and an experimental group, each 50 feet wide by 30 feet deep; all containing the tree of heaven — the insect's preferred host — and other species that are attractive food sources, including peach, grape, maple and hop plants.

Using hydraulic sprayers, one set of control plots was treated with water and the experimental set was sprayed with a commercial biopesticide containing the Beauveria fungus in water. Trays collected falling insects. Mortality levels between the control plot and the Beauveria plot were compared. Tree leaf samples were collected and taken to a laboratory to see how long the fungus would last. Dead SLF and other nontarget insects are being tested to determine if the biopesticide caused their demise and, if so, to what degree.

The process is then repeated to determine how long the compounds were effective. Later the process was repeated with the adult SLF.

This is the second summer that David Biddinger, tree fruit research entomologist and research professor in Penn State’s Department of Entomology, is coordinating research studies at the CASSE. Last year, Biddinger’s team studied the biology and lifecycle of the SLF and tested 35 compounds, and another 12 were tested this year. He explained that they are looking at long-term sustainable methods of control and how long these methods are effective.

The SLF has been a major problem for vineyards. One of the challenges when developing pesticides is that fruit tree growers have pre-harvest intervals in which they can’t spray their crops, so insecticides must be long-lasting, explained Biddinger. Researchers must have data on the length of time that compounds are effective. This data is being used to inform fruit growers and homeowners, and it is particularly important for vineyards that are surrounded by woods as they need to be sprayed for SLF almost every day.

An advocate for "soft" pesticides that encourage beneficial insects and are less toxic to bio-control agents, especially when dealing with fruit crops such as grapes and peaches, Biddinger practices Integrated Pest and Pollen Management, balancing the efforts of eradicating the SLF with efforts to conserve the bee population, which is also susceptible to insecticides.

Biddinger, who has worked with several invasive insects over his 30-year career, including the brown marmorated stink bug from Asia, has a philosophical outlook on the spotted lanternfly.

“More needs to be studied, but if this research pans out, it could be a turning point," said Biddinger. "Time will tell.”