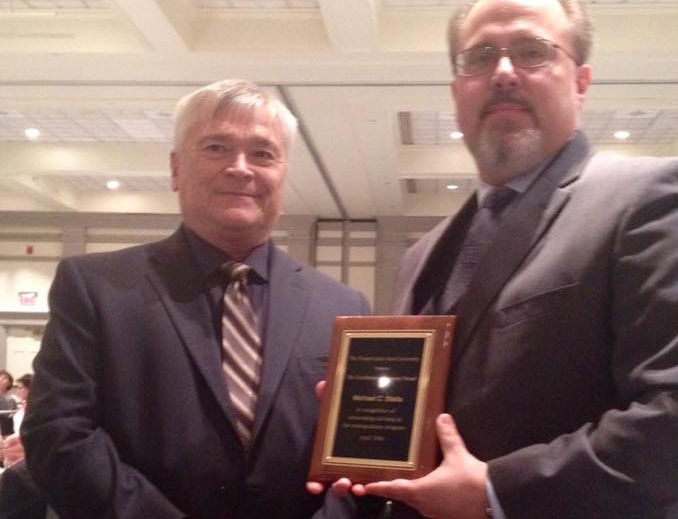 Michael Stella, Senior Undergraduate Studies Adviser at Penn State Berks, recently received the 2016 Penn State Excellence in Advising Award. He has served as an academic adviser at the college for the past 18 years.

When asked about his philosophy on advising, Stella stated, 'My goal is to get the student to where he or she needs to go academically, whether that's Penn State Berks, University Park, or another campus. Over the years, I have noticed more and more students choosing to complete their degrees at Berks as the college has grown and added baccalaureate degree programs. I let the college speak for itself in terms of what it offers and students are deciding to stay for the degrees, the smaller class sizes and the relationships they have made along the way.'

He also stated that it's important to communicate with students. Students appreciate quick and thorough responses to their questions, but he said it's more than that. He wants to be an example for his advisees, letting them know that in their burgeoning disciplines they'll be expected to execute tasks with professionalism.

'Students recognize how seriously I take their time and their success, and they learn the benefits of such habits on professional relationships,' he said.

Stella said it's important to keep up with the latest academic policies and procedures so he can accurately and effectively relay the information to students.

'In modeling this commitment to accuracy, students learn the benefits of getting it right the first time and also realize how my dedication to accuracy impacts how they view me,' he said. 'They learn that the kind of information they communicate, as well as the extent to which it is accurate and clear, says something about the person communicating that information.'

Stella is a firm believer in alternative advising scenarios. He's always searching for out-of-the-classroom ways to advise students, and uses his services to be active in University clubs, organizations and events.

'No two students' paths are the same,' comments Stella. 'That makes my job exciting.'

First-year student Shelby Jefferson describes her experience, stating 'I was interested in changing my major and Mr. Stella was more than helpful. He helped me match my passion to a major at Penn State. I switched from Hospitality Management to Environmental Systems Engineering. He told me that the course load I was going to be taking would drastically change, but he said, 'If you are passionate about it, you can make it work.' Since I received advising from Mr. Stella, I have recommended him to all of my friends who need advising help.'

The award, established by the former Undergraduate Student Government's Academic Assembly and sponsored by each college, annually honors one full-time professional adviser and one full-time faculty member from any Penn State location who have at least two years of advising experience. Selection criteria are based on excellence in general advising, academic and career guidance, enthusiasm and assistance in decision making, and goal setting. Leif Jensen, distinguished professor of rural sociology and demography in the College of Agricultural Sciences was the faculty recipient.