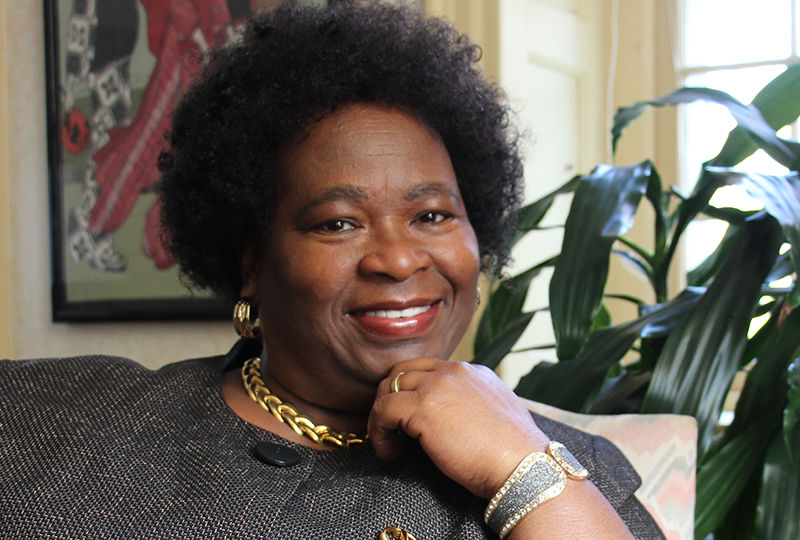 WYOMISSING, Pa.––The key to understanding people is to understand their perspective. What Sharon Pitterson-Ogaldez brings to her role as the coordinator of diversity and international programs at Penn State Berks is not only a passion for the work, but that necessary understanding. Once an international student herself, Pitterson-Ogaldez understands the challenges facing students studying abroad -- both at the surface and on a deeper cultural level.

Pitterson-Ogaldez began working at Penn State Berks in 2016, and since then she has introduced several new initiatives including a series of lunch-and-learn certificate workshops for faculty and staff to learn about the different student populations; cross-cultural training of a group of international student mentors, who are hired to support incoming international students; the Berks Community Connections Series, workshops that explore a new topic each academic year such as religions and cultural identities; and the Berks Emerging Scholars Transition Program, which aims to prepare multicultural students for their transition to college.

Currently Pitterson Ogaldez serves as the chair of the college’s faculty and staff Diversity, Equity and Inclusion (DE&I) Committee, which leads training and programming intended to foster community among students from varied backgrounds. She is also the staff adviser of the Campus Inclusion Advocates, the student arm of the DE&I Committee, in which students are trained to hold workshop on DE&I topics using public dialogue facilitation techniques.

In addition, Pitterson-Ogaldez has conducted an Intercultural Development Inventory with the Berks campus, assessing the intercultural competence of the campus community to better tailor the trainings and workshops offered.

DE&I activities on campus, celebrations of holidays and festivals such as Diwali, Mid-Autumn Festival, Black History Month, Thanksgiving, Turban Day, and more, are open to all students, faculty and staff and serve as a platform for them to learn from and educate one another while celebrating different cultures across the world. Her goal, she explains, is to foster understanding that leads to reduced microaggressions and inequity.

It was a search for understanding that led Pitterson-Ogaldez to find her passion in student affairs and DE&I. As an international student working on her doctoral dissertation at the University of Maryland, she kept having to go back and forth with her professor, making edits to her dissertation. “I realized that it wasn’t that I couldn’t write, it was that he couldn’t recognize the cultural application of what I was writing, and what I was trying to do.”

Unbeknownst to Pitterson-Ogaldez, this experience would kick off a journey that would take her several more years to complete. Born and raised in Jamaica, Pitterson-Ogaldez worked in a veterinary virology lab after college, testing and researching viruses that affect farm animals. When she decided to switch paths and attend veterinary school in the United States, she began studying animal science at Alcorn State University, a historically black land-grant university in Lorman, Mississippi.

During her time in the U.S. as an international student, Pitterson-Ogaldez later transferred to a predominantly white institution (PWI), where she faced microaggressions, outright racism and sexism, and frustrating thought processes and biases from her classmates and professors. When she found herself facing the prospect of defending a dissertation that would likely not be understood, she decided to make a change.

Pitterson-Ogaldez and her husband moved  to his homeland of Belize, where she began teaching science at a local high school and college. Four years into teaching there, she had become the chair of the science department and implemented a team-based teaching approach. The concept of team teaching challenged the students to work in groups, which were determined by their test scores, with the goal of helping each other learn. She also worked to connect what they were doing in the classroom to their everyday life, their culture, and their community.

Eventually, the strain of the differences in culture became too much for Pitterson-Ogaldez. In Jamaica, she says, the population doesn’t tend to divide itself by ethnic group. But that was a fundamental aspect of the culture in Belize and her mixed marriage with her Belizean husband caused a lot of social difficulties for both, which put a strain on their relationship. It was strongly reminiscent of the race relations and tensions she had experienced in America, and when she discovered she was pregnant, she decided she didn’t want to raise her child in that kind of ethnically discriminatory environment.

She and her husband decided to return to the U.S. so that he could complete his doctorate, at Colorado State University. After a little while working as a community coordinator for an apartment complex on the campus, Pitterson-Ogaldez told a supervisor she was considering going back to school. He advised that she consider studying student affairs in higher education. “I had never heard of that,” she said, “and I decided to apply with a week to spare before the deadline.”

During the program, she began formally learning about diversity, equity and inclusion in higher education and the U.S. and began ‘unlearning’ many incorrect messages and biases she had previously simply accepted. Then while visiting Belize to renew her visa, she picked up a video about her husband’s culture, focused on his Belizean ethnic group. She thought it might be an interesting experience for the two of them and their children to sit down and watch it and learn together. More than that, it turned out to be a lightbulb moment for her.

In watching the video, they realized how completely different their cultures were. While they had seemed superficially similar, all the difficulties and struggles they had faced as a couple, all the things they had considered flaws and failures in one another, could be explained by the vast fundamental differences in their cultures. “No one around us could recognize that and help us with it,” she recalled. This, she says, lit a fire in her to educate people on how our cultures train us, educate us, and blind us to other perspectives and can lead to exclusion, racism and genocide.

Today, working with international and multicultural students at Penn State Berks, Pitterson-Ogaldez strives to forge bonds of belonging and to create a safe place where all are appreciated. Many students have shared that her work inspired them to form friendships across racial, cultural and ethnic lines. Faculty, staff and administrators have thanked her for helping to change the campus climate to becoming more inclusive and welcoming. The theme of this year’s Unity Day celebration captures her mission -- "The humanity in us protects the diversity among us."

With a scope of work that touches every corner of campus and every member of the campus community, and a challenge that has only become more heavily scrutinized in recent years, how does she keep her eyes on the prize? With a simple mantra, one that will serve the campus well moving forward: “The true essence of DEI, from my perspective, is love for humanity.”