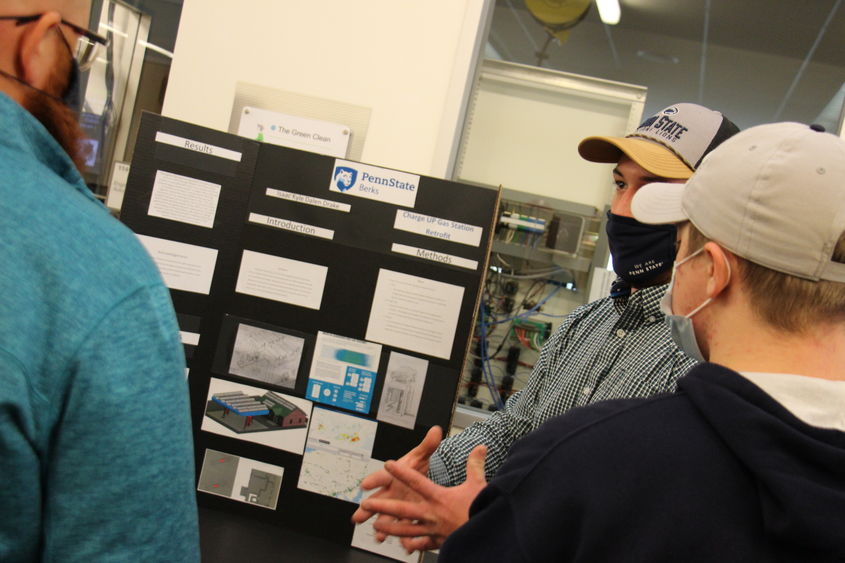 First-year engineering students at Penn State Berks recently competed to design a residential charging solution for electric vehicles (EVs) that is sourced by renewable energy. The top three teams received cash awards. The competition was such a success that it will held again in the spring 2022 semester and this time it will focus on commercial charging stations.

The students were enrolled in the Cornerstone Engineering Design course. They broke into 13 teams and then familiarized themselves with renewable energy and identified the issues with current market solutions. During their design processes, each team identified a unique solution to their specific problem. Designs included retractable charging cords, all-season charging stations, solar-powered charging stations, and the winning project: a design for retrofitting and converting unused gas stations to charging stations.

The teams were required to demonstrate an understanding of the design process, as well as to demonstrate professional skills, systems thinking, hands-on fabrication, and communication skills. Below are excerpts from the final projects submitted by the winning teams.

“We found that the conversion of standard fuel dispensing stations to charging stations is a lengthy process. Factors including the costliness and the infrastructure that would be required to make this a reality were larger than expected. After data analysis, it was noted that an overall cost of $5,701,078 would be required to acquire, renovate, and operate the charging station. In reference to that cost, a total of 300 individual panels resulting in 3,000 square feet (about the area of a tennis court) could produce 135kWh of energy per day. The data also proved that the power generation for the solar panels would allow 2.31 full charges for a 58.5 kWh battery from the 3,000 square feet of solar panels that were projected to be installed. The estimated cost of solar panel arrays came in at $46,440. The overall cost of the charging technology alone was estimated at $454,416 for four ports that housed four individual DC fast chargers which each produced 50 kWh of energy. Also, the cost to install these chargers was averaged at $26,964, which included things like permits, labor, and materials. (We found) operating this charging station would be inefficient because of the cost to store energy.”

“The BackPack system is a level two residential electric vehicle charging station that runs on solar energy. When inside the dock, the BackPack works as a typical charging unit, converting energy captured by the solar panels and storing it in the battery, and when the battery is full, the system sends excess energy to the grid. Its main feature is a portable battery pack that allows it to be taken from the dock and used away from home as a portable battery and charger, extending the range of an electric vehicle by 60 to 80 miles with a full charge of the BackPack. This feature is especially useful for long road trips, as users of the BackPack could avoid driving out of their way to charge their electric vehicle at a commercial charging system. The estimated cost of the complete BackPack system before government subsidiaries, which includes solar panels, is $39,406.00. The BackPack itself contains a Powerwall+, a charge amplifier, a cord, wheels, a handlebar, a coiler handle and shaft, and the SAE J1772 plug, allowing the system to be functional and mobile.”

“Our design included a charger (ChargePoint Home flex) connected to a nine-panel 4kW system tied to the grid with a 14-kWh backup battery (Tesla Powerwall). The final cost would be $36,634 for the whole package. This would include a nine-solar-panel-system, the charger, the Powerwall, installation, and taxes. Although expensive, each solar panel generates 20.8kwh of energy per month. Using nine solar panels and generating around 187.5kwh a month, our monthly solar panel cost is less than $20.63. When solar power is not available our system uses backup battery tied to the grid using the same kwh per month as the solar panels. The cost per month using the battery tied to the grid can range anywhere from $6.96 to $27.86. This brings the monthly total to $27.59 to $48.49. The average person in the Northeast United States pays about $100.97 for gas (per month). The average electric car uses 257.14kwh. The solar panels are most efficient from April – October in the Northeast; our system will rely mostly on grid power due to the lack of sunlight.”

“Our team wanted to efficiently store charging cables as loose cables pose a safety hazard. The solution was a device that could retract and store the cord efficiently and out of the way. This was in part due to other cord-like products being stored in such a way, a good example being extension cords in a machine shop. With the cord stored away automatically, there is less of a chance for something to damage the cord or for someone to injure themselves on it. The general idea had the automatic spoiling idea and included the protective weatherproof covering. The final design holds four main components, the two external cases, front and back respectively, as well as the spring mechanism and internal spool. The full dimensions were 31” in diameter and would spool and contain up to 30’ of charging cable within its weatherproof covering, allowing for indoor or outdoor use.”

The competition was coordinated by Kathleen Hauser, assistant teaching professor in engineering at Penn State Berks, and it was sponsored by East Penn Manufacturing Company, a private company and the world's largest single-site, lead-acid battery facility located in Lyon Station, Pennsylvania, and Greg Flemming, retired IBM executive and a supporter of the Penn State Berks engineering program. The contest was also supported by guest lectures from two industry professionals: Norbert Maleschitz, senior vice president of technology and innovation at East Penn, and Tom Wessner, formerly of Tesla.