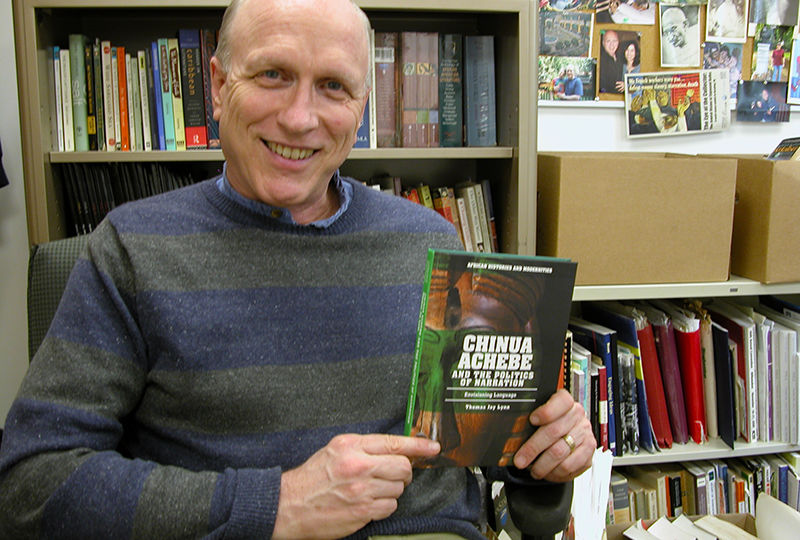 Lynn publishes book on Chinua Achebe and politics of narration

Chinua Achebe (1930-2013) was a novelist, poet, professor and critic from Ogidi, an Igbo village in Nigeria. His first novel, “Things Fall Apart,” often considered his best, is the most widely read book in modern African literature. Published in 1958, “Things Fall Apart” is a classic of world literature and required reading for students, including Lynn’s, selling more than 10 million copies in 45 languages.

It was inspired by the history of Achebe’s own family and his fellow Ibos who were victimized by the racism of British colonial administrators and then by the brutality of military dictators from other Nigerian ethnic groups. However, Lynn said that Achebe also acknowledged some benefits that colonialism brought to Africa.

Lynn discovered Achebe in 1994 and learned more as he was working on his doctoral dissertation on African literature at the University of Arkansas in Fayetteville. He completed the dissertation in 1999, a few months before he came to Penn State Berks.

“When I read [Achebe’s] first novel, ‘Things Fall Apart,’ I knew right away it was one of those ‘aha’ moments, that this was something really important to me,” said Lynn, whose scholarly and teaching interests include the literature of Africa and its diaspora, postcolonial literature, ancient literature, and folklore, including tricksters.

The book also details Lynn’s assessment and fascination with “tricksters,” which he studied in mythology and Native American lore. According to Wikipedia, a trickster is a character in a story who exhibits a great degree of intellect or secret knowledge, and uses it to play tricks or otherwise disobey normal rules and conventional behavior. Lynn said that Achebe often draws on a trickster of Igbo tradition named Tortoise.

Lynn, one of the original members of the Penn State Berks Global Studies faculty, is also the coordinator of Berks’ associate degree in letters, arts and sciences. His fascination and deep respect for Achebe and other important postcolonial authors such as Salman Rushdie, Wole Soyinka, V.S. Naipaul, Nadine Gordimer and Doris Lessing began in 1991 when Lynn went to India for a Fulbright seminar. 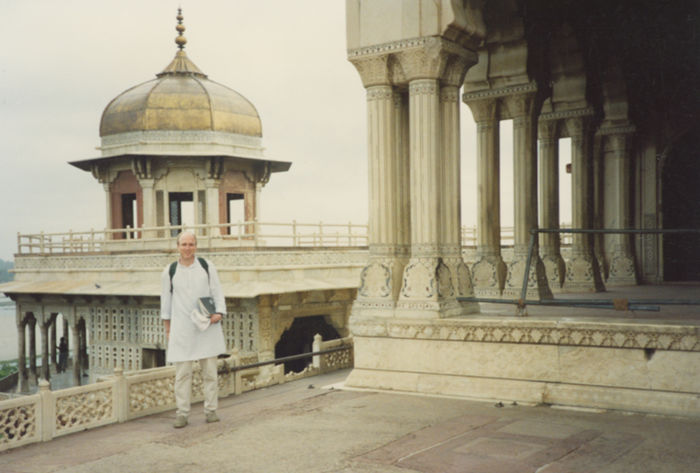 Thomas Jay Lynn on his visit to India

“It was an overpowering moment in my life. I was interested in Indian culture in many ways, including the visit by the Beatles who traveled there in 1968 to learn from and see the Maharishi. I thought, ‘Wouldn’t it be great to be a university professor teaching Indian literature.’ I had no idea of how to go about it, but one thing led to another and I decided to go back to grad school.”

Lynn has extensively studied and included Achebe’s and other postcolonial authors’ works in many of his classes and in 2012, decided to write this book. “I found the proverbial thread that tied everything together, writing about the way Achebe’s fiction makes various political gestures. I also wanted to show how he used language, writing in English but drawing in Igbo, Nigerian Pidgin English and folklore. Really, he was Africanizing the English novel,” said Lynn.

Each of the nine chapters of Lynn’s book focuses on the intersection of narration, linguistics and politics in five Achebe novels. These books consist of Achebe’s narrative response to Western authors who have written on Africa; his integration of Igbo folklore, including tricksters; the political implications of writing African literature in English; his use of Nigerian Pidgin; and the Nigerian Civil War. The book also addresses teaching Achebe’s writing.

Lynn said that, until Achebe’s “Things Fall Apart” and his other books, including “No Longer at Ease” and “A Man of the People,” Africa’s tale had largely been told by Western voices.

“Achebe combined many elements within the conventions of an English novel in his works. He drew on African languages to shape the English of his novels. There were political accents in everything he wrote, as he stood up for Africa and Nigeria with a more inclusive narrative consciousness. He said previous attitudes about colonialism were inaccurate and unjust,” said Lynn.

Achebe had strong feelings about injustice, said Lynn: “He stressed in 1988 in a speech at the University of Texas that … ’things are generally all right from the [Western] view. That’s because the West runs the world. But from the view of Africa and the Third World countries, the world is upside down and needs to be totally reordered.'”

Achebe stated that he wished to “espouse” an “adequate revolution,” which was to help his society “regain its belief in itself and put away the years of denigration and self-abasement.”

Equally important, Lynn said, Achebe was able to recognize that colonialism was not a total failure. In a 1967 response to an interviewer, Achebe said, “Although you see life is not simple — it’s often so complex. There have been gains — I mean, let’s not forget that, there have been gains. I am not one of those who would say that Africa has gained nothing at all during the colonial period. I mean this is ridiculous — we gained a lot.”

“In markedly different ways … Achebe’s tricksters impart to readers some of the vitality and insight of the cultural past while mediating a vision of the future. In his fall from the sky, Ekwefi’s (a character in ‘Things Fall Apart’) Tortoise anticipates the demise of colonialism’s rule of the many by the few,” said Lynn, adding that tricksters encourage resistance to authority.

Colleagues and critics have praised Lynn’s book. “Astute, meticulous and fresh in its focus, Lynn’s study is a notable contribution to Achebe studies,” noted one critic. Another wrote, “an … illuminating long perspective, which integrates discussion of Achebe’s fiction and nonfiction, (and) offers new insights into Africa’s most iconic writer and the postcolonial politics of narration.”

Lynn made the right choice when he decided to make a long career of international literature, and — coincidentally, helped design a three-credit Beatles course — since the knowledge gained reading and teaching far beyond American and English novels is priceless.

“Achebe’s writing offers students and instructors varied opportunities to discover and debate significant historical, social, and literary questions. Students are responsive, moreover, to the author’s vividly etched characterizations and situations, which are both accessible and challenging,” said Lynn in his book.

“I have a deep admiration for Achebe (who also was deeply involved in Nigerian politics and the justification of the short-lived nation of Biafra) and I think all the world agrees he is one of our most important and most respected writers. I am pleased that my book will add even more insight into his work and show how it helped to restructure a global vision of Africa.”

Lynn’s other African literature publications include 11 articles, one book chapter, and many encyclopedia entries on Chinua Achebe, including a chapter-length entry on Achebe's second novel, “No Longer at Ease.”

In a related development, Lynn announced that Achebe’s third son, Chidi Chike Achebe will visit Penn State Berks on Feb. 21 and 22, 2018. Chidi Chike Achebe is chairman and CEO of African Integrated Development Enterprise, which seeks to develop a comprehensive, integrated health system built in phases across Nigeria that delivers world-class healthcare and is run and managed by an international cadre of medical experts and professionals.