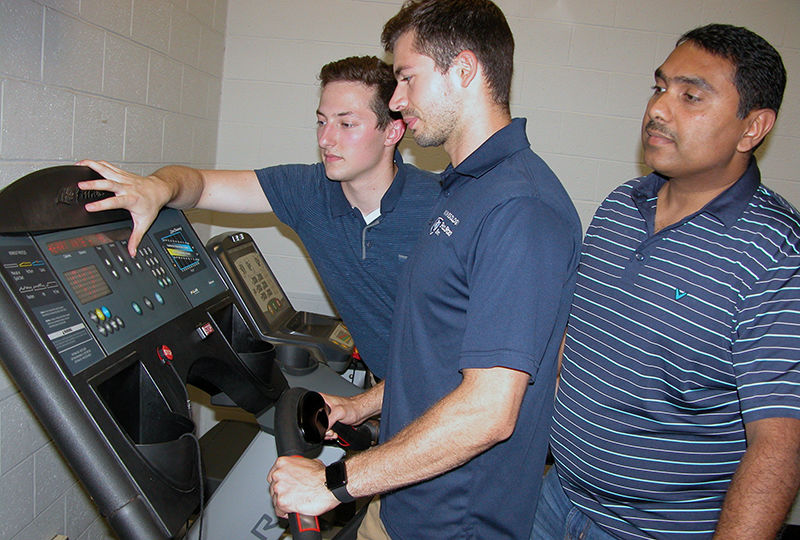 READING, Pa. — If anyone knows the value of research and what it means to a well-rounded college education, it is Praveen Veerabhadrappa, assistant professor of kinesiology at Penn State Berks, who along with several recent graduates, just completed an important physical exercise study verifying the accuracy of the Apple Watch 1 in recording steps during walking and jogging.

Currently, Veerabhadrappa’s research is focused on incorporating wearable technology to enhance physical activity and improve health. His team of students and colleagues, including Assistant Professor of Engineering Matthew Rhudy, has been studying the cardio-metabolic effects of sedentary behavior using novel devices such as Actigraph, Fitbit, Vibralite and the Apple Watch, and have presented research at local, regional and national professional conferences.

“Dr. V,” as he is affectionately called by students and colleagues, has “walked the walk.” At age 40, he has compiled an impressive curriculum vitae of research-related accomplishments, awards and activities in support of his teaching and ongoing contributions to the body of health and physical exercise knowledge.

Veerabhadrappa said his broad background in medicine and specific training and expertise in cardiovascular exercise physiology has led him to study the cardiovascular benefits of exercise and physical activity and the long-term effects of physical inactivity, which has earned him international recognition.

“I am wired very contrarian. If everybody is doing the same thing, we don’t advance much, so while there is plenty of information about the benefits of exercise, not enough is known about the sedentary life,” he said, adding that he had a kind of ‘reverse epiphany’ regarding working out.

“In fact, no exercise is not the opposite of any exercise. It is devastating. Dr. James Levine of the Mayo Clinic, a leading expert on sedentary behavior, is credited with calling sitting the ‘new smoking.’ Thus, I want to do all that I can to make people get off of the couch.”

Veerabhadrappa, a faculty member at Penn State Berks since 2015, said the most exciting part of his research agenda is engaging students in research projects.

“To be a really good researcher, I look for humility and passion in my students; I practice them every day myself," he said. "As teachers, we can’t fill those in. Other skills we can teach.”

“Dr. V” also believes in making maximum use of campus resources, including collaborating with Rhudy and other faculty members.

“We have achieved a great symbiosis. The icing on our cake for our research is the interdisciplinary collaboration between kinesiology and mechanical engineering that created the Penn State Berks Human Movement Research Center (HMRC)," he said.

The latest research study completed by the team, “Tracking Steps on Apple Watch 1 at Different Walking Speeds” and published in the June 2018 issue of the Journal of General Internal Medicine, is one of the first to objectively validate the accuracy of the step counts obtained at different walking speeds from the first Apple Watch introduced in 2015.

“When Apple came up with its watch, it was a breakthrough," said Veerabhadrappa. "Because I use other Apple products, including an iMac and an iPhone, I was naturally interested in it. Also, I am a huge fan of the late Steve Jobs, the way he communicates, they way he thinks. He is very inspirational."

The accuracy of the Apple Watch and other such devices is critical to the person using them to accurately track their physical activity — in this case, steps. The study included 71 participants of different ages and body mass who were videotaped as they walked (slow, moderate, brisk and jog) on a treadmill fitted with a watch paired to an iPhone. The number of steps appearing on video were then compared to those recorded on the watch.

“Three key findings emerged,” said Veerabhadrappa. “The Apple Watch proved to be extremely accurate for recording daily step counts. And, it seemed to be the most accurate at the moderate pace. This might be a practical application since the American College of Sports Medicine recommends moderate intensity exercise. Finally, our results may help reinforce individuals’ trust in these devices.”

Fortunately, Veerabhadrappa said, he is working with dedicated students.

“I have been very lucky in building teams for research and other learning. I feel that my core strength as a teacher is bringing likeminded people together who share a single vision,” he stressed. “The students drive this; I just guide them. I am like their GPS. They are driving the car, but if it is not moving, a GPS makes no sense.”

“Dr. V” said he continues to build on his research that began when he was a student at Temple University, where he received his doctorate in 2012 and his master’s four years earlier. He was awarded an MBBS from Rajiv Gandhi University of Health Science at Bengaluru, India in 2003.

His early research efforts directly addressed the cardio-metabolic risk factors in the African-American population in North Philadelphia. As a research assistant, he found the concepts of masked hypertension and blood pressure variability “novel and fascinating.” That research was one of the first studies to demonstrate that high levels of inflammation were associated with lower cardiorespiratory fitness, blood pressure variability and masked hypertension in this population.

Also part of what Veerabhadrappa considers one of his most significant accomplishments was the collaboration with the Jackson Heart Study (JHS) group, the largest investigation of causes of cardiovascular disease in a population of 5,300 African-American men and women in Jackson, Mississippi.

Based on that success, he became a member of the American Heart Association and the International Society of Hypertension. He later co-founded the society’s New Investigator Network, which now has some 400 members in 30 countries. The network forms a platform to foster collaborations, mentorships and potential leadership opportunities for emerging scientists.

Among his accomplishments are publishing 22 manuscripts and more than 60 abstracts in peer-reviewed journals; reviewing peer manuscripts and serving on editorial boards; helping to generate grant funding for Penn State Berks students; and organizing or speaking at many meetings and symposia globally including ones in Shanghai, London, Sydney, Athens and Seoul.

“Artificial intelligence, or AI, to me is the next logical step. Can we use Amazon’s Alexa or Apple’s Siri to promote physical activity?” posed Veerabhadrappa.

“It could improve sports performance, for example, cyclist training on a stationary bike with a player showing the Tour de France. We could enhance the experience while monitoring heart rate, blood pressure and other signs," he said.