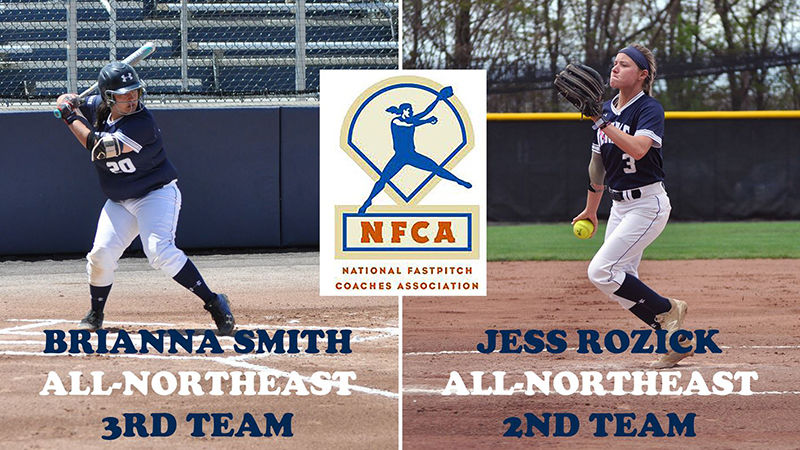 READING, Pa. — Penn State Berks students Jess Rozick and Brianna Smith received more honors for their phenomenal performances in the 2019 softball season by earning spots on the National Fastpitch Coaches Association (NFCA) teams. Rozick was selected to the second team and Smith was named to the third team.

Rozick was an All-Northeast Region Second Team selection in 2018 and was named to the first team in 2017, while Smith garners the regional honor for the first time in her career.

Rozick was her typical dominating self in the pitcher's circle this past spring, finishing the year with a 15-4 record and one save. The senior right-hander owned a 1.60 ERA with 18 complete games, five shutouts, and 136 strikeouts in 126.2 innings pitched. Rozick struck out seven or more batters in 11 games, including a season-high 13 punchouts in a win over SUNY Cobleskill. Rozick tossed a gem in a win over Penn College in the NEAC winners bracket and capped off the tournament with a five strikeouts against six batters to earn the save in the NEAC Title game. She then gutted out a complete game with nine strikeouts and three hits allowed in a 5-3 victory over Brandeis University in the opening round of the NCAA Tournament. Rozick went on to strikeout three more hitters and give up just one run and two hits in two relief appearances at the national tournament. At the plate, Rozick batted .321 (18-for-56) with four doubles, one triple, one home run, nine RBI, and three runs scored.

Smith improved on her strong rookie campaign in 2018, by turning in some impressive numbers this spring. The sophomore first baseman/catcher batted .468 (59-for-126) with 19 doubles, tow homers, 35 RBI, 21 runs scored, and 15 walks. She had a .667 slugging percentage and sported a .531 on-base percentage. She was the team leader in all of those previous categories except for runs scored, which was tied for fourth on the team on. Smith hit safely in 33 of the 41 games she appeared in, while recording two or more hits on 18 occasions. Smith enjoyed a record setting performance by going 6-for-6 with three doubles, eight RBI, and four runs scored. In that performance, she set or tied the single-game record for hits, doubles, and at-bats, while her RBIs were second most and the runs scored were tied for fourth most. She was named the NEAC Tournament MVP for the second straight year after batting .889 (8-for-9) with one double, one homer, three runs scored, and two RBI. At the NCAA Tournament, Smith .375 (3-for-8) with one double and one RBI. Smith is just as valuable in the field at catcher and first base, where she recorded 190 putouts, 11 assists and had a .995 fielding percentage.

Rozick, Smith and the Nittany Lions finished the year 32-10 overall and went 18-0 in league play. They won the NEAC Tournament for the third straight season and sixth time in seven years.