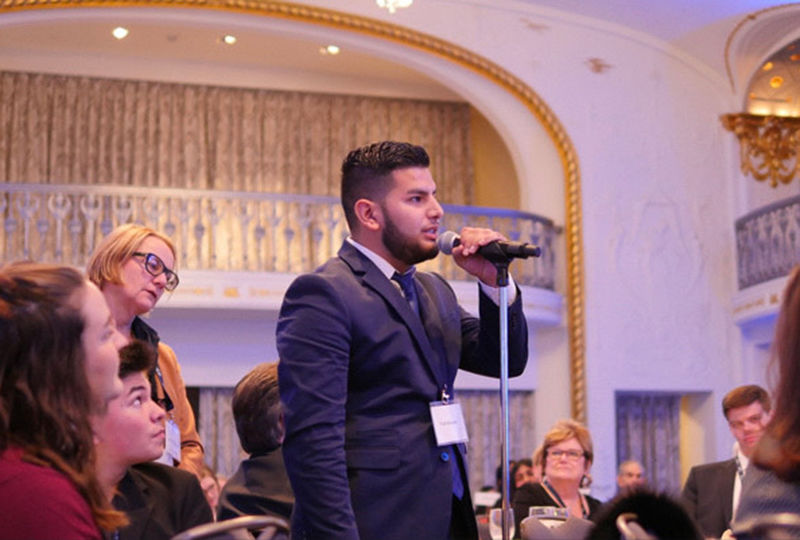 Flores is one of 30 students nationwide to receive scholarship
Lisa Baldi
December 18, 2019

Josh Flores, a junior global studies major at Penn State Berks, was one of more than 30 students nationwide to receive a scholarship from the World Affairs Council of America (WACA) to attend the WACA 2019 National Conference from Nov. 6 to 8, at the Mayflower Hotel in Washington, D.C.

A resident of the city of Reading, Flores’ parents migrated from Mexico more than 20 years ago. He explains that he grew up hearing stories of struggle and human-rights violations and developed an interest in learning more about the world and how it deals with these challenges. This interest brought him to Penn State Berks, where he decided to major in global studies with a concentration in Latin American cultures.

At Penn State Berks, Flores is president of the World Affairs Club. He also acts as the student liaison to the World Affairs Council of Greater Reading, the organization that nominated Flores for the scholarship to attend the WACA National Conference, which covered conference registration and a stipend for travel expenses.

For Flores, the conference was an exciting and educational experience. This year's theme was “The 8 Forces Reshaping the Global Economy.” He states that he enjoyed meeting other college scholars who are studying international relations and intercultural communications and hearing different points of view. He also relished the opportunity to discuss modern contemporary issues and added that he even had an opportunity to ask a question of former Secretary of State James Baker III during Baker’s presentation.

When asked about his future plans, Flores said that after graduation from Penn State Berks, he would like to continue his studies at Penn State’s School of International Affairs and concentrate on the economies of Latin American countries. He is also interested in the nonprofit sector, an interest that was ignited by his summer with the Cultural Vistas Fellowship Program.

As a first-generation college student, Flores said he understands the value of education and its impact on human lives and communities, and wants to help children achieve their full potential through education, learning and development. Through Penn State Berks, he mentored high school juniors at Reading High School to introduce them to the possibilities of higher education through the Penn State Educational Partnership Program (PEPP).

“When I think of my future, I envision dedicating myself to enabling communities to thrive and prosper,” he stated.