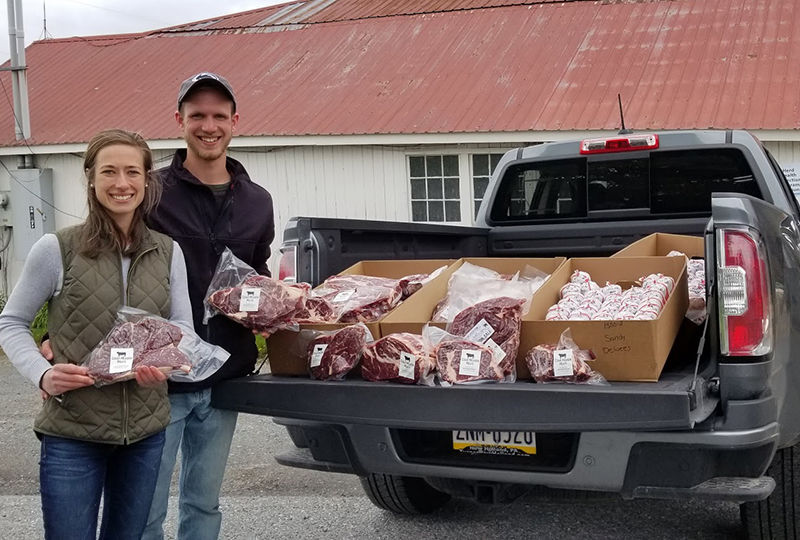 When Penn State alumni Gareth Yoder (Berks 2014) and Joy Beam (University Park 2017) came up with an idea for a business, they needed some direction about how to get started so they turned to the Penn State Berks Idea TestLab for assistance. In a few short months, they launched Cedar Meadow Meats.

It all began when Yoder was helping out on Beam’s family farm and he had the idea of developing an application to determine if the cattle were healthy in real time. That idea grew into an application that could be marketed to the cattle industry.

Yoder explained, “When we entered the Penn State Berks Idea TestLab, we started with the idea of developing a health and analytics application focusing primarily on the beef cattle industry. We conducted interviews and found definite pain points our product could address. However, as we encountered hardware roadblocks and constraints on the time to market software with limited resources, it became apparent that we had to go back to our original SWOT (strengths, weaknesses, opportunities and threats) analysis and adjust our focus to a different opportunity with a new target audience. We utilized the resources we had available and the knowledge we gained from our client discovery experience to develop a revised business plan.”

The customer discovery experience that Yoder refers to is the opportunity they had to talk with and learn from potential customers. Yoder and Beam attended the National Cattleman’s Beef Association conference and trade show in San Antonio, Texas.

Beam states that they spoke with a lot of people in the industry –representatives from about 200 different companies in all – and found that some ranchers already had similar technology to what they were proposing and that the method that they were planning to use to capture data would take too long.

While they were disappointed that their idea already existed in the marketplace, they didn’t let it get them down, explained Yoder. They went back to the drawing board and attended seminars about where the beef industry was headed. 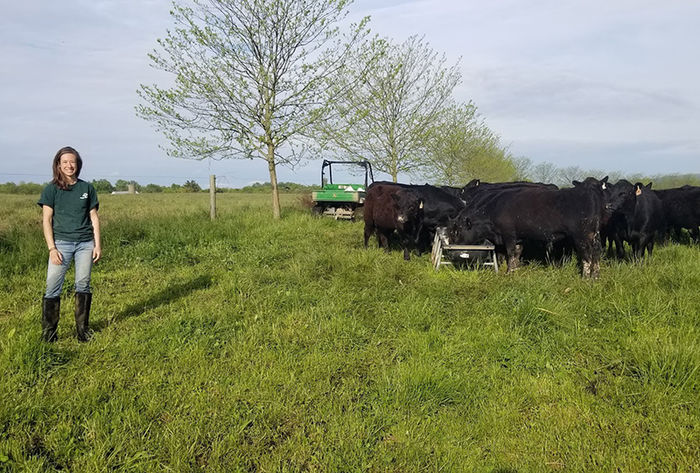 One discovery they made along the way is that the agriculture industry is interested in marketing where their beef comes from. Another discovery that Beam made is that hamburgers are priced at about $6 each in the supermarkets, where their steak costs about the same amount per pound.

Beam and Yoder have complementary knowledge and experience, allowing them to work well together. Beam owns a family cattle farm in Elverson, Pennsylvania. and earned a bachelor of arts in animal science from Penn State University Park. Meanwhile Yoder has a strong technology background with a bachelor of science in information sciences and technology and minors in both security and risk analysis and entrepreneurship and innovation from Penn State Berks. He went on to earn a master of business administration from Penn State Great Valley.

After the customer discovery phase, they continued to connect with others in the local agriculture business, including two couples in Elizabethtown. Yoder spent a month-and-a-half creating their website: cedarmeadowmeats.com.

Meanwhile Beam began to sell several steers through their news business model. Customers are able to choose the portion of the steer that they wanted to purchase. Then the cattle are processed at a local butcher for customer pickup.

According to the website, “Farm to fork flavor far outpaces that found in the grocery store. How the animal was fed, the quality of the cut, and even the butcher all make the difference. In fact, did you know that the highest premium cuts on the market are sold overseas and never make it to the grocery cooler? The best beef eating experience can sometimes only be found by sourcing your meat privately.”

“Cedar Meadow Meats is geared toward those who enjoy grilling, eating steak and burgers, who also want the pride of knowing where their food comes from. Our client discovery experience showed that beef consumers want to know the story behind where their food comes from. This type of traceability isn't available in your box chain food stores or at the fast food restaurant down the street. In addition, our customers help support local agriculture and the local economy,” states Yoder.

Beam adds that the recent spread of the coronavirus provided an increased demand for local beef and with shortages from meat packers, it provided an opportunity for the company.

Both Yoder and Beam state that they wouldn’t be where they are today without the assistance that they received from Sadan Kulturel-Konak and Abduallah Konak in the IdeaTest Lab.

The Penn State Berks Idea TestLab by the Flemming Creativity, Entrepreneurship and Economic Development (CEED) Center is one of the area’s newest resources for testing the validity of a new business idea. It offers startups free access to other entrepreneurs, faculty members, business owners, venture capitalists, members of the community and many other resources. Part of the Penn State Berks Flemming CEED Center, the Idea TestLab further expands the University’s strong emphasis on entrepreneurship programs and other campus activities.

The Idea TestLab has been developed as part of the National Science Foundation (NSF) I-Corps initiative at Penn State (The Invent Penn State NSF I-Corps Site is funded by the National Science Foundation NSF Grant No. 1735627). NSF established the program based on the Lean LaunchPad, an entrepreneurship methodology to test and develop business models based on querying and learning from customers, explained Kulturel-Konak.

In accordance with the NSF guidelines, all ideas for the program must be based on Science, Technology, Engineering and Mathematics (STEM) disciplines.

Kulturel-Konak summarized, “You can’t test your business idea inside the building. You can’t build your business in a laboratory. Together we can easily see whether a business model can succeed, or what it needs to do so. I feel really good about how much we have been able to help our teams in our Idea TestLab sessions.”

Teams interested in the Fall 2020 CEED Idea TestLab session should check the Idea TestLab application website periodically. Applications will open after the current session is complete.