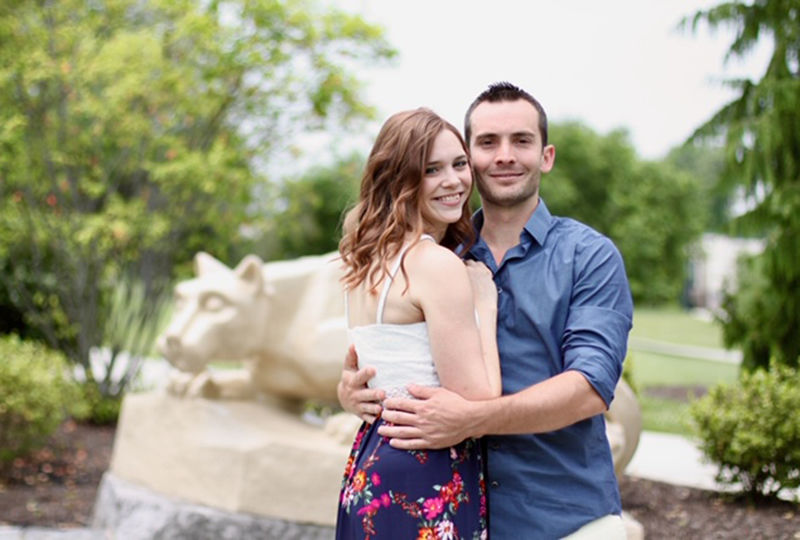 WYOMISSING, Pa. — When Liz (Weidner) and Nolan Campbell were making their wedding plans, they never dreamed that the coronavirus would wreak havoc on their big day.

Liz, a 2014 graduate of Penn State Berks with a bachelor of science in elementary and early childhood education, said that they knew the restrictions in place to slow the spread of the coronavirus were going to make it necessary to postpone their May wedding, so they decided to move up their wedding date to March 31, and have a virtual ceremony. 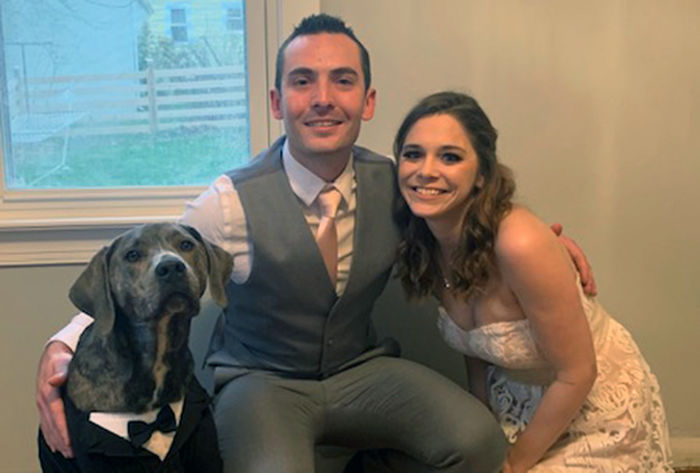 Liz, Nolan, and Nittany take a family photo after the wedding ceremony.

“We already have a house and fur babies, and all our friends have been calling us a ‘married couple’ for a long time,” she explained. “Neither of us likes to be the center of attention. With a virtual ceremony, we were able to have our pets with us (dog Nittany and cats Luna and Oscar), and invite more people.” Nittany, who was named for Liz’s alma mater, even wore a tuxedo.

“And the guests loved being able to attend in their pjs,” she added jokingly.

Liz states that she was born a Penn State fan and even learned to play checkers on a Penn State checkerboard. Knowing her love of all things Penn State, Nolan proposed to Liz at the Nittany Lion Shrine at University Park campus.

But ironically Penn State didn’t bring them together. While Nolan works as Penn State Berks women’s volleyball coach, they did not meet on campus: he has only worked in this position for the last year.

“They say how you meet someone is how you will marry them,” explained Liz, adding that they met on Match.com and then ended up getting married online. “The wedding was short and sweet and to the point, and that’s how we like it,” Liz stated.

Liz is currently employed as a teacher in the Reading School District, and enjoys bringing Penn State items into her classroom.

When the time is right, Liz and Nolan plan to return to campus to have professional wedding photos taken. Until then, they will enjoy starting their next chapter together.