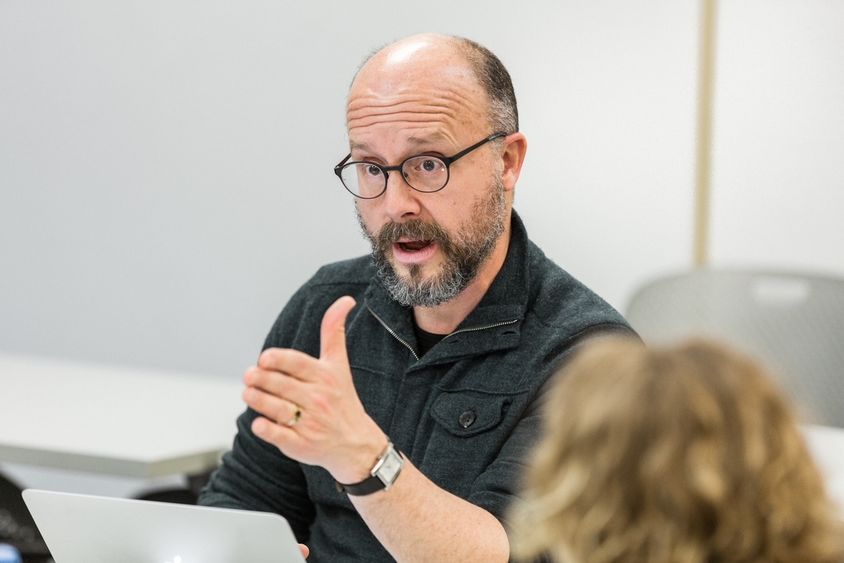 Alumnus Carmelo Esterrich, an associate professor at Columbia College Chicago, has written a Star Wars book that he believes serves as a strong "conversation starter" about the movies and all other part of the "Star Wars Multiverse."

When it comes to Star Wars, one Penn State alumnus wrote the book — literally.

Carmelo Esterrich admits “Star Wars Multiverse,” a 130-page paperback, is not all-encompassing, but it’s a conversation starter for sure. The recently released book offers many potential talking points, from the iconic movies to fiction, comics, cosplay, TV shows and almost anything and everything related to Star Wars.

“The book is not the last word. It’s just me helping you think further on Star Wars,” said Esterrich, an associate professor at Columbia College Chicago who earned his bachelor’s degree in film studies and was a member of the honors program at Penn State.

In the book Esterrich explores how the stories set in a galaxy far far away reflect issues that hit closer to home. He examines what they have to say about authoritarianism, colonialism, discrimination, perpetual war, political oppression and more. This book demonstrates that the multiverse is not just a stage for thrilling interstellar battles, but also an exciting space for interpretation and discovery.

“Honestly, I was sort of a ‘bad’ fan. I’d only really watched the movies, not the TV shows, and didn’t read the novels. The sequel trilogy was my tipping point; I started to realize there was this larger Star Wars world,” said Esterrich, who grew up in Puerto Rico and started his career at Penn State Berks. “I began to read comics and fiction. Then, for the book I filled in the gaps — junior novels, Little Golden Books, and so much more.”

“Star Wars is fascinating on so many levels. With this book, I didn’t want to depend on value judgements, which one is the best movie or the worst, nothing like that. It’s not about bashing or defending anything. It’s about understanding the complexities and the contradictions of Star Wars, how the narrative worlds of Star Wars work.”

An award-winning teacher, Esterrich spent much of the 2020 pandemic writing and editing the book. His book pitch during a Star Wars convention in Chicago in early 2019 was approved in a surprisingly fast five weeks. He was on a sabbatical leave in 2020 and was planning to focus his research on Brazilian cinema. But the pandemic made that impossible. Instead, he adjusted his focus to finish the Star Wars manuscript.

“It was the pandemic and we were all sheltering in place, so it was writing every day, including weekends, with breaks for breakfast, lunch and dinner,” Esterrich said. “It was all book, all the time, and it was wonderful. When I was not writing, I was watching movies and TV shows, or editing my writing. I wanted to make sure my book was accurate and correct.”

Esterrich’s search for success started at Penn State Berks, which he chose specifically as a freshman. He had visited Reading, Pennsylvania, as part of a church relationship in high school and, when he applied to the University, he felt most comfortable at that campus.

“I was interested in schools that had engineering and film. Also, because my English was not as good and I had never lived in the United States, I wanted to try something smaller and I knew Reading a little bit,” he said. “I loved the experience at Penn State Berks. I had amazing teachers.”

“Then, after about two weeks of engineering courses, I quickly switched to film and my adviser at Berks, she was amazing, she encouraged me to get to University Park after my first year.”

At University Park, Esterrich combined academics and cocurricular activities well, succeeding in the classroom while eventually becoming artistic director of the Penn State International Dancers and meeting his husband (they celebrated 34 years together in late September).

“Penn State has been very good to me,” he said.

After grudgingly taking a role as a ballroom dance instructor Esterrich also discovered his love of teaching at Penn State. It’s a love he maintains until his day. And, starting in January, he’ll add a Star Wars twist to that as well.

He’ll be teaching a Star Wars course to 50 students at Columbia College Chicago next semester.

“I can’t wait,” he said. “I’m really excited to teach it and hear their perspectives as well.”