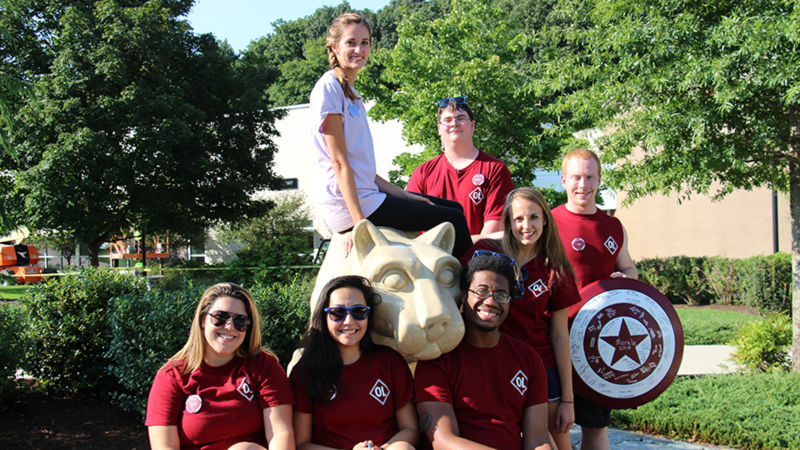 Stepping foot on a college campus for the first time can be an intimidating experience for students… until they are greeted by an enthusiastic, energetic group wearing brightly colored outfits complete with tutus and other accessories. The college’s approximately 110 orientation leaders (OLs) are the first to welcome students to campus and help to ease the transition to college life.

Orientation leaders are involved in virtually every aspect of first-year students’ journey, from helping them transport their belongings to their residence hall suites on Move-in Day (Friday, August 18), to New Student Orientation Part 2, which begins on Friday and runs through Sunday, to serving as mentors in first-year seminar courses.

When asked why they became OLs, these students had one overwhelming response: An OL helped them adjust to college and feel at home when they first arrived. 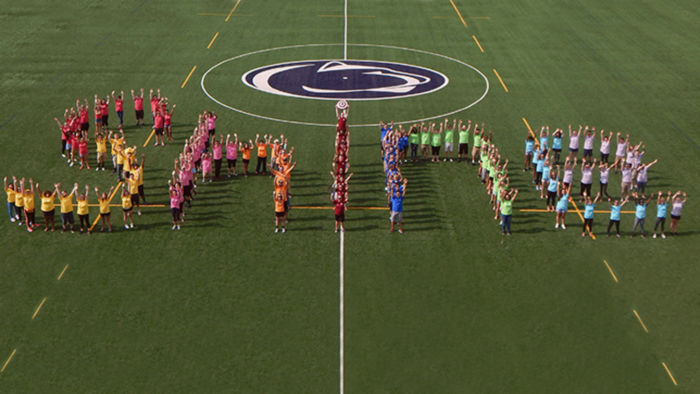 The Berks Orientation Team formed the word 'Shine' on the athletic field to celebrate the kickoff of the 17-18 school year.

Darren Davis, a senior with a dual major in Information Sciences and Technology and Security and Risk Analysis, is the OL Lead Captain. When he first came to Penn State Berks, he met a student tech assistant who talked to him about opportunities to get involved. Davis, an aspiring musician from Philadelphia, was interested in audio/visual technology so when he learned about the Operations and Physical Plant Team, one of the orientation teams that handles video and sound for orientation events, he was excited. The team quickly became his second family.

“First and foremost, I wanted to help first-year students and give them the resources they need to grow,” he states. Davis is now beginning his third year as an OL. He originally planned to begin his studies at Berks and complete his degree at University Park campus but the atmosphere and connections he made at Berks made him want to stay.

“I was greatly impacted by my Orientation Leaders when I first moved to campus,” comments Jackie Kanaskie, a senior Biology major from Bethlehem who became an OL and is now the Assistant Lead for the Events and Logistics Team. “The warm-and-fuzzy feeling and personal touch made it feel like home. Now I enjoy seeing people excited to be here and I want to make the first-year experience the best it can be for incoming students.”

Kaylee Grindrod, a senior Applied Psychology major, adds, “Orientation was so much fun. It made me feel part of the Penn State family. Now I want to give back and create that same environment for incoming students.” In her role as OL Color Captain, she provides guidance to her fellow OLs. As a member of Berks benefitting THON, she also helps first-year students with an interest in community service to get involved in THON, the largest student-run philanthropy in the world.

In addition, there are “special” teams which include the Movers and Shakers (sky blue), Operations and Physical Plant (orange), and First-Year Group Leaders, whose members are dispersed into the other teams. Finally, there is the Lead Team (garnet), which assists in the planning of the orientation activities and events. Its members are selected in October and they start planning almost immediately for the upcoming fall semester.

After the first-year residential students move in on Friday, OLs assist with activities such as a Residential Student Orientation. The evening’s events–open to all first-year, residential, and commuter students–include a residence hall rally; Crazy Bob’s pajama party, a highlight involving games and prizes; late-night sand volleyball and kickball; and concluding with a late-night movie.

Orientation activities continue through the weekend: The college will hold its Orientation program for all students on Saturday, August 19. Highlights will include the Rally in the Valley, in which Berks alumni who were OLs return to their alma mater to help with orientation activities. There will be a special program for commuting students on Sunday, August 20, in which all the resources available will be discussed.

The weekend will be full of energizing activities that help students to become more comfortable with the campus, themselves, and each other. Erik Fredericksen, a senior Mechanical Engineering major with a minor in Business from Boyertown, will lead these activities as Assistant Lead Captain for Morale, a position that keeps everyone “pumped up” during orientation. He can be found leading line dances such as The Wobble and Cotton Eye Joe.

Frederiksen also coordinates orientation for student athletes whose schedules make it difficult for them to attend the orientation events. He explains that practices have already begun for members of the men’s and women’s soccer teams and women’s volleyball team, so he meets with the teams when they are available and brings orientation–and the fun–to them.

After a full weekend of activities, most of the Orientation Leaders go on to work as First- Year Mentors, assisting students in their first-year seminars, a required course that helps students to transition to college life.

Kailah Ortiz, a senior Biochemistry and Molecular Biology major from Lancaster, explained that her desire to become a First-Year Mentor led her to become an OL, a prerequisite for the position. She states, “I wasn’t sure if I would be a good fit as an OL, but I met great people and eventually became First-Year Group Leader Captain.”

One of the great people Ortiz met was her best friend, Kasey Raifsnider, a senior Accounting major from Bernville, who serves as First-Year Group Leader Assistant Captain with Ortiz and OL Color Captain. She too wanted to become a first-year mentor and needed to begin by joining the OLs. She exclaimed that she fell in love with the position.

The OL program not only helps incoming students to get involved–it also helps the OLs to explore their passion. Andrew Bush, a senior Electro-Mechanical Engineering Technology major with a minor in Theatre from Elizabethtown, has always been interested in technology. As Assistant Lead Captain for Audio and Technical Assistance, he has the opportunity to work with sound and lighting behind-the-scenes for orientation events such as the dance on Saturday evening.

Kanaskie summarizes by explaining that the OLs are incoming students first friends; if they see first-year students sitting alone in Tully’s, the campus cafeteria, OLs will sit down with them and help them get through the transition to college life.

The Penn State Berks Orientation Program is staffed by 110 student OLs, 23 resident assistants, and other members of the college community who make every effort to help students and their families make a smooth transition to college life. The program is coordinated by Autumn Fritz, Assistant Director of Community Development. 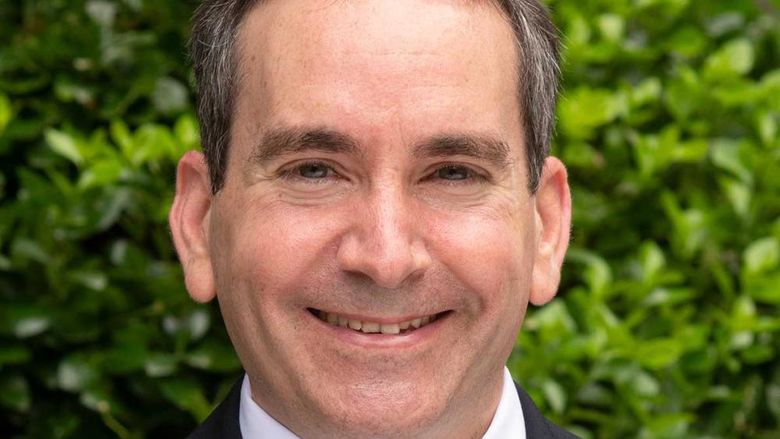 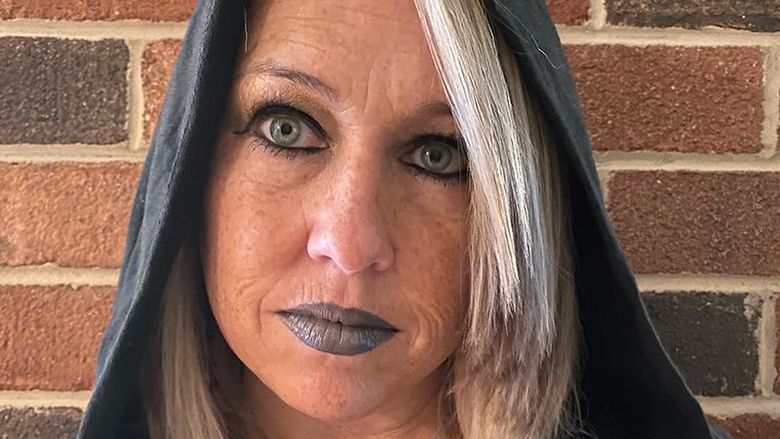