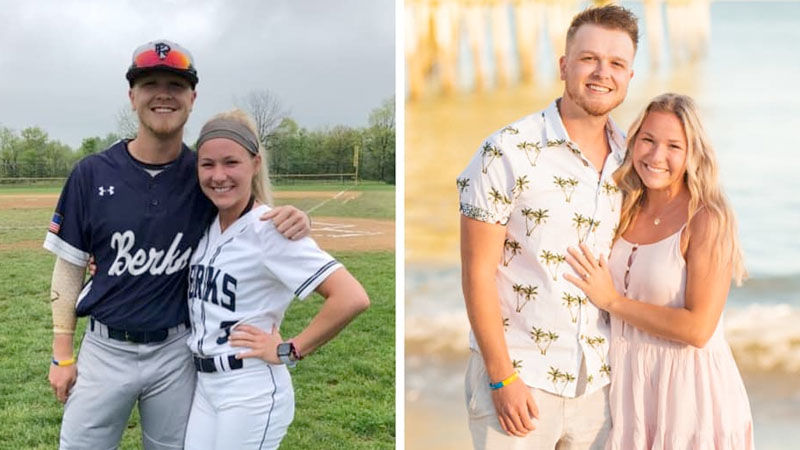 Couples who met and fell in love while they were students at Penn State Berks share their stories in celebration of Valentine's Day!

“We met in RHS 100 through a book study project created by Dr. Meghan Owenz where we collaborated on a group project together. At Berks, we served as leaders on the Student PSEA board and participated in the Camp Noah service trip. WE ARE… forever PSU Berks!”
- Hunter Beane (Elementary and Early Childhood Education, 2020) and Brooke Eveland (Elementary and Early Childhood Education, 2021)

“Dalton Hughes & I met in Fall 2015 in nutrition class. We grew closer as the years went on, as he played baseball and I played softball. We started dating in Fall 2018! We just got engaged in Fall 2021 and we’re beginning to plan our Fall 2023 wedding! We are forever grateful for PSU Berks and all the memories that came along with it #GoBerks
- Dalton Hughes (Biology, 2019) and Jessica Rozick (Kinesiology, 2019)

“We met at Berks in January 2017 by mutual friends. We started dating in February 2017, and got engaged in May 2021! WE ARE getting married in September of this year Ben is a current PhD student at Lehigh University studying thin film depositions for the improvement of semiconductor devices in material science. I recently graduated from an accelerated nursing program and am a labor & delivery nurse at Lehigh Valley Hospital. We also have a kitten named Nittany.”
- Ben Garland (Material Science, 2019) & Brianna Diefenbach (Science, 2019)

“Met at Penn State Berks in 2007; together since 2008, and graduated in 2010! Dillon now also holds two Masters degrees (Masters in Education and M.Div), and Emily holds the title of Mrs. Pennsylvania Worldwide, as well as being a professional model, author, and TV host on BCTV. We have one daughter, Brielle, and a Golden Retriever mix we adopted named Teddy.”
- Dillon Kenniston (Communications and Professional Writing, 2010) and Emily Fitzpatrick Kenniston (Elementary Education, 2010).

“Ryan first noticed my awful dancing during freshmen orientation 2014, but it wasn’t until Spring 2016 when we officially crossed paths in our sophomore Thermodynamics class. Thankfully a mutual friend helped Ryan finally get the courage to ask me to hang out. We were close friends throughout college, and kept in touch after. In February 2021 we went hiking and realized the true feelings we had. We had our first date in March 2021 at the Canal Street Pub, and the rest is as they say ‘history’.”
- Ryan Leid (Mechanical Engineering, 2018) and Lindsay Tucker (Mechanical Engineering, 2018)

“John Acker and I met at Penn State Berks. We started dating in August of 2017. We both graduated in December of 2018. After our Bachelor’s degree we both went to ESU for our Masters in Exercise Science. We have a soon to be 4 year old golden retriever! I am currently the Group Exercise coordinator for Wyo Fit Clubs. John is currently working as a general contractor and working part time at Exeter fitness. We will be together for an amazing 5 years this year! “
- Sydney Drayer (Kinesiology, 2018) and John Acker (Kinesiology, 2018)

“Austin Tyson and I met at Penn State Berks in 2016 and started dating in 2017. After graduating in 2018 we decided to move to Virginia to be closer to family. Austin is a thriving line cook in a local brewery and I am a restaurant manager at a country club. We got engaged in 2021 and are now planning the wedding of our dreams for October 2022.”
- Andrea McCoy (Hospitality Management, 2018) and Austin Tyson (Hospitality Management, 2018)

“Chase Taylor and I met our first semester (August 2016) while taking STAT 100. We were close friends before we officially started dating. Chase studied criminal justice and is now working in law enforcement. I studied education (later transferred to KU) and am now a teacher! Going on 6 years this year! PSU Berks will always have a special place in our hearts!”
- Dakota Faust and Chase Taylor (Criminal Justice, 2020)

“We technically met during NSO 1 but didn’t realize it until we started school and had 5 classes together. From day one, we fell more in love at Penn State Berks. We spent every moment together while at Berks. I had to got up to Main Campus to finish my degree but we still made it work for those 2 years. Now, we are engaged and we could not be happier for finding each other at Penn State Berks!”
- Jacob Conrad (Elementary Education, 2020) and Jill Farina (Secondary Education, 2020).

“Ryan Tantala and I met at Penn State Berks in the beginning of September 2011 and started to date a week later. Sports brought us together and has always been a huge part of our lives. Ryan played baseball and I played softball, and we actually played the same positions (pitcher & first base). Our teammates and the athletic department would call us Mr. & Mrs. Shooter because they knew we were inseparable. We both immediately started full-time jobs, got engaged in 2016, built our house in 2017, got married in August 2017, and rescued two cats (Jax & Neko). We’ve been together for over ten years and thankful our story began at Berks.”
- Casey Tantala (Business, 2015) and Ryan Tantala (Business, 2015)

“We met in 2017 the first weekend of college playing a game with a bunch of our friends and we started dating in February of 2018.”
- Andrew Tallman (Electro-Mechanical Engineering Technology, 2020) and Katelyn Borrell (Journalism).

“In the spirit of Valentine’s Day I’m thankful for one of my favorite people I met at Penn State Berks  - my husband!
Where we met: Gaige Building, 2nd Floor
About us: We just celebrated our postponed wedding reception earlier this year (thanks COVID) but got married last year. Erik is partway through med school at VCOM in Southwest Virginia (having joined their honors society) and I’m working in higher education, during my spare time I focus on all things creative! We are thankful for Penn State Berks and all of the lovely people we met there!”
- Erik Avis (Biochemistry and Molecular Biology, 2019) and Katarina (Zambanini) Avis (Communication Arts and Sciences, 2016)

“Ilyssa and Erik met at berks in the fall of 2014 when they were both orientation leaders. Erik was on the lacrosse team during his time at Berks. Ilyssa was actively involved in Thon and CAB, acting as president her senior year. In just two short weeks, we will be getting married at the Mountain Valley Golf Course in Barnesville.”
- Ilyssa Schwartz (Applied Psychology, 2015) and Erik Fredericksen (Mechanical Engineering, 2018)