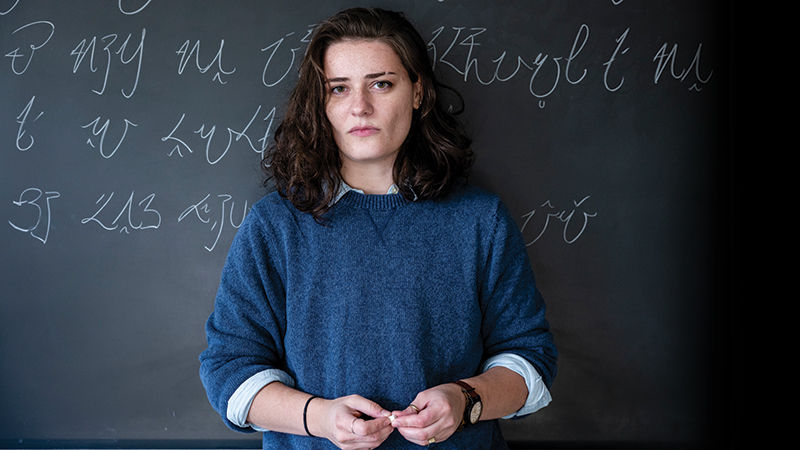 A Democracy of Language

Constructed languages, or conlangs, have a long and storied history in fiction and television. From Klingon to Dothraki, conlangs have served as a means of transporting audiences to new lands, introducing them to new cultures, and serving as a definitive indicator of otherness.

But Jannah Martin sees conlangs, and her own constructed language in particular, as a means of bringing cultures together and closing that gap of otherness. Martin, a senior Communication Arts & Sciences major at Penn State Berks, is completing a Schreyer Honors College thesis by constructing a language intended to serve as a bridge language. As opposed to the more familiar artistic application of a conlang, a bridge language serves as an intermediary language for a translation algorithm like Google Translate. When translating from German to English, for example, the algorithm will run the sentence through a bridge language first, in order to ensure that it has correctly understood nuance and neutralized biases.

But the system is imperfect — Google Translate will often choose to translate certain gendered terms according to their use frequency in the language. This leads to a gender bias in translation algorithm than can skew or even obscure the translation. “One example,” Martin says, “is that the Turkish language doesn’t have a different term for ‘he’ or ‘she’. So if you take the sentence, for example, ‘she is a doctor’ and translate it to English in Google Translate, it’ll most likely translate it to ‘he is a doctor’ even though there is nothing to suggest in the original language that it should be a ‘he’.”

The conlang Martin is developing, called Katfa’fulan’zhosa (KFZ), is gender neutral, designed specifically to address this bias in the existing algorithms. “If you use a bridge language such as mine, which also doesn’t have genders, it will ensure that English is encoding it as ‘they’ or ‘he or she’,” she explains. This elimination of bias, and therefore minimization of translation errors, is a key component of the thesis project Martin plans to present. The thesis will include descriptions of conlangs as concepts, historical precedence, plans for the application of the language, and then a lexicon and usage guide — almost like a linguistic travel guide.

As a part of the Schreyer Honors College, Martin had the opportunity to select a thesis that fit her interests and skill set. While a thesis paper is the most recognizable exponent of the process, some students choose creative projects such as plays and artwork. Building on a long-standing interest in linguistics and linguistic anthropology, the conlang path seemed a natural course for Martin. “At its heart, it’s a creative project. That’s a possibility for people who are doing theses— it’s a chance to explore different things. I’m doing research, but I’m also getting to create something new and not just report something that has already been established.”

Schreyer Honors College Coordinator Sandy Feinstein said that she “wasn’t surprised when Jannah asked if she could focus her thesis on constructing a language. In her first semester at Berks in English 30T, Jannah wrote about being interested in cryptography, and, in another class, she created a cryptogram.” Martin has been working on developing KFZ for three or four years now and working on the thesis for two. Martin has worked the study of linguistics and linguistic anthropology into many of her class projects—something she says she was only able to manage because of the personal relationships she developed with her professors. “With the smaller classes, there was a lot of interaction with the professors. I’ve had professors that I’d go up to and ask, ‘There’s something specific with linguistics I want to do a project on, can I work that into this project on gender? Can I work that into this project on biology?’ Professors all over the college have allowed me the freedom to focus in on the things I found interesting within their curriculum and go my own direction with that.”

Two classes in particular Martin says helped her to develop her conlang project. “Language, Culture and Communication” (CAS 200), taught by Dr. Kesha Morant Williams, is focused on dialects and the effects cultural differences have on language. Martin says “This helped me to create a more natural language flow based on a fictional background, which informs pronunciation, written variations, and word order.”

Another class she credits with influencing her constructed language was “Nonverbal Communication” (CAS 470), taught by Dr. Cheryl Nicholas. “Learning how things like tone, appearance, physical position, etc. can serve as communication helped me with the aesthetic components of the script,” Martin explains. “It also influenced the way certain words sound and how those sounds could be interpreted just based on tone, and how word order can suggest importance or significance.”

Martin’s communications arts and sciences professors and thesis advisor aren’t the only ones impressed with her work on Katfa’fulan’zhosa: In 2020, she was awarded the Young Investigator Award from the Penn State Berks Division of Humanities, Arts and Social Sciences. Presented to one student in each of the college’s academic divisions, the Young Investigator Award recognizes those students who have demonstrated outstanding scholarship and performance or unusual achievement during their internship, co-op, or research. Martin says she was absolutely honored to receive the award and hopes to show the faculty how she applied what they taught her and how she used their trust and support to pursue her project.

The Ephrata, Pa. native plans to graduate this fall with a B.A. in communication arts and sciences. And after that? “I’d love to find a way to continue to work with linguistics, probably in an academic sense.”