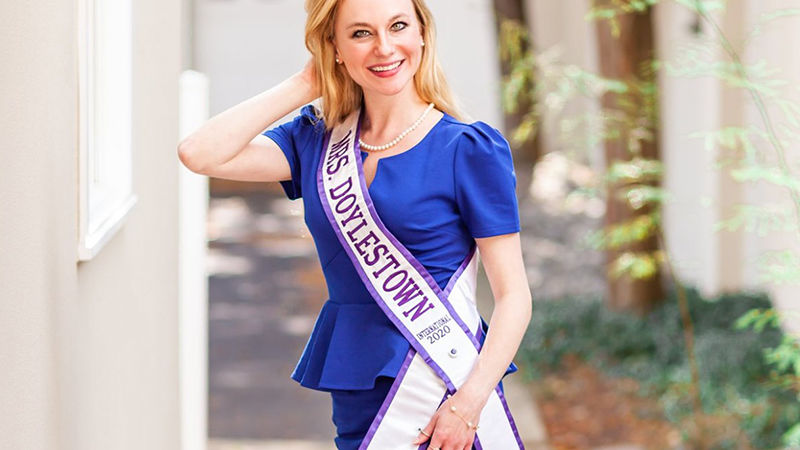 Emily Fitzpatrick Kenniston took full advantage of her four years at Penn State Berks, setting the stage for a lifetime of success and a bid for Mrs. Pennsylvania International.
By: Alan Shirk

Emily Fitzpatrick Kenniston took full advantage of her four years at Penn State Berks. Those four years have set the stage for a lifetime of success, and now a bid for Mrs. Pennsylvania International.

She graduated with a bachelor of science in elementary and early childhood education and taught for several years; met her future husband; began her modeling career in a Valley Magazine spring fashion show at University Park campus as a junior; strengthened her operatic soprano voice as a member of the campus choir; established many lifelong friendships; and found her “home away from home.”

Kenniston said she keeps on growing as a wife, mother, role model for young girls, entrepreneur, author, actress and singer -- largely based on what she learned and discovered during her four undergraduate years.

“It seems like everything significant happened to me there,” said Kenniston.

Competing for Mrs. Pennsylvania on April 4

Currently, she is preparing to compete in the Mrs. Pennsylvania International Pageant at Altoona Area Junior High School on April 4 of this year and will appear on Philadelphia’s NBC 10 on March 12 to announce that she has been named the Pennsylvania on-site coordinator for Princess for a Day, an empowerment program that is her chosen pageant platform.

Princess for a Day, headquartered in Laurel, Maryland, and operating primarily in metro Washington, D.C., focuses on teaching poise, etiquette and media preparedness for girls ages 3-15 from start to finish -- social functions, luncheons and a final professionally photographed red carpet event where the participants are crowned by other pageant winners.

“Princess for a Day reminds girls that they are beautifully and wonderfully made, just the way that they are,” said Kenniston. “I'm so honored to promote and endorse a program that focuses on teaching girls to acknowledge, respect, and proclaim their own unique beauty.”

Guided by her Christian faith

Guided by her own Christian faith and inner strength, Kenniston is energetic, enthusiastic and empowering.

Kenniston was home-schooled from first to 12th grade, receiving a classical education she praised. In 2006, after her junior year, her family decided to move from New Jersey to Mohnton in Berks County, Pennsylvania. During an outing exploring her new surroundings with her father, she recalled that they passed a sign for Penn State Berks and her father said, “That’s a good school.” She enrolled in the fall of 2006 and graduated in 2010.

“My parents, Jim and Sue Fitzpatrick, could not have raised my sister, Anna, and me any better. They inspired me to have a marriage like theirs and also to follow my dreams. My parents are my inspiration.”

While she praised her parents for their overwhelming support of her life and education, there was a bit of a trade-off since home schooling does not surround you with classmates and lots of social interaction, she noted.

“There were times when I felt a bit lonely and that is one of the reasons I want to support and champion young girls everywhere. Social media is not the best thing to count on for validation and companionship, and it can be a dangerous thing to turn to when young people are dealing with loneliness.” This is in large part why Kenniston is passionate about working with a program like Princess for a Day, that focuses on the beauty within for young girls, rather than just the superficial.

“As a woman myself, I know what it feels like to compare myself to a standard that is not even real, and I can't even imagine how much harder this is for young girls to have to endure. I always say that there is danger in comparing everyone else's highlight reel of life -- the perfect things that people post on social media to your own behind-the-scenes footage, and this is even more true for impressionable young people,” she explained.

“It’s an age and time where beauty seems to be determined by the newest Instagram filter or the latest Photoshop techniques.”

Breaking out of her shell

Kenniston was determined to be much more social at Penn State Berks, which is why she joined the choir. Within the first few days, she met the outgoing Lindsey (Kurtz) Hart; they remain close friends. Taking a chance on the Valley Magazine fashion show was another big step in 2009. Taking classes and interacting with professors challenged her academically and socially.

After graduating in 2010, Kenniston began teaching preschool at St. Ignatius Loyola Regional School, West Lawn, and supervising after-school care at Sacred Heart School, West Reading, both in Pennsylvania. After that came two years of teaching third through fifth graders at St. Mark’s Classical Academy, Jenkintown, Pennsylvania, which she called two of the “best years of her life.”

She and her husband, Dillon Kenniston, met during their freshman year in a human development and family studies class. At the beginning of their sophomore year, they ended up enrolled in another class together, during which she “saved him” during a disagreement with a professor. “He was engaged in a spirited debate with the professor and I came to his aid. We began sitting together shortly after. On our first date, I knew I was sitting across from my future husband.

Among her cherished moments

Among her most cherished moments is her husband’s proposal of marriage during Christmas 2011 that included him sending her on surprise trip to four places where they had had dates and him singing to her their special song, “All I Ask of You” from "Phantom of the Opera." “It was so beautiful,” she recalled.

Kenniston, son of Penn State Berks Professor of Applied Psychology Brenda Russell, and Emily married in 2014 and have a daughter, Brielle, 2. They are in the process of moving to Sinking Spring, Pennsylvania.

Dillon graduated from Penn State Berks with bachelor of arts in communication arts and science and professional writing. He also holds a master of education degree through the Teach for America program as well as a master of divinity from Westminster Theological Seminary. He is currently the senior implementations manager for RobustWealth, Inc., Lambertville, New Jersey. 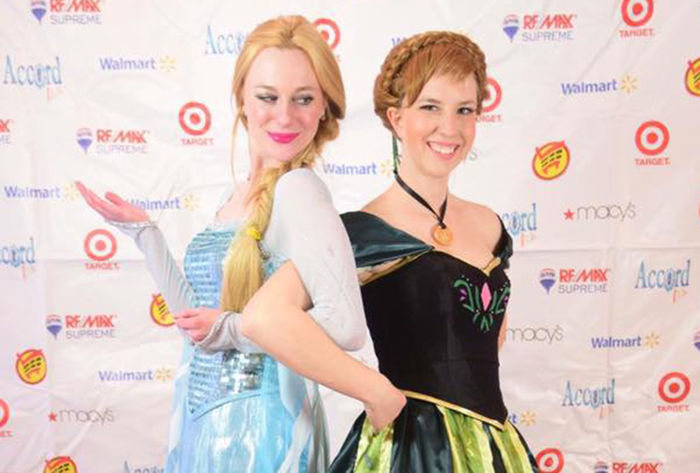 Emily Fitzgerald Kenniston, left, poses as “Elsa” from the Disney movie, Frozen, for a photographer friend’s series of winter-themed children’s photos. This project would later help her in creating the Pennsylvania Princess Project.

The same year they wed, Kenniston had an opportunity to pose as “Elsa” from the Disney movie, "Frozen," for a photographer friend’s series of winter-themed children’s photos. She said the project brought so much joy, that she was inspired to take it on the road.

“So I created the Pennsylvania Princess Project in 2015, which has performed at various hospitals, parties and events everywhere from Philadelphia to Lancaster to Maryland to Virginia. Its premise is to spread God’s love to children everywhere, regardless of their ability to pay. Our group of volunteer and talented actors and actresses who portray princesses and super heros provide countless smiles and lots of love.”

This project led to her eventual involvement with Princess for a Day.

Another milestone for Kenniston

Another milestone for Kenniston in 2019 was being named Mrs. Doylestown International 2020, automatically qualifying for the Mrs. Pennsylvania International competition in April. The Kennistons have lived in Doylestown for three years. She is also a print and commercial model and actress for the Look Models and Actors Agency, Doylestown.

And, if that isn’t enough, Kenniston has also written two books: "The Empire," a tale of love, despair and the ultimate triumph of forgiveness set against the tumultuous and sensual backdrop of Ancient Rome (which she jokingly calls “very rough and in need of further editing,”) and "Fear of Man," a psychological thriller that she is editing in anticipation of publication.

She has a lot to look forward to, including, she said, one day home schooling her own daughter and hopefully reaching the point where her life is just about others.

“Marriage keeps you on your toes. It is very sanctifying. At the end of the day, if God, my daughter and my husband are proud of me, that’s the only crown I need.

The Mrs. International Pageants were developed to promote today's married women, their accomplishments, and their commitment to family and marriage. Since the mid-1980s, the Mrs. International Pageants have emphasized contestants’ interviews and replaced the swimwear competition with an aerobic wear competition. Participants say they are finding this system to be the opportunity to work with their husband and family to become positive role models.