One Berks alumna — Corina Piller, class of 2016 — took advantage of the state’s shutdown to pursue a new hobby — creating soy wax candles, which has blossomed into a full-time business.

Over the last year, the coronavirus has had a negative effect on many things. However, one Penn State Berks alumna — Corina Piller, 2016 — took advantage of the state’s shutdown to pursue a new hobby — creating soy wax candles, which has blossomed into a full-time business. Her company, ShePaintsCo, has been burning bright since March 2020. 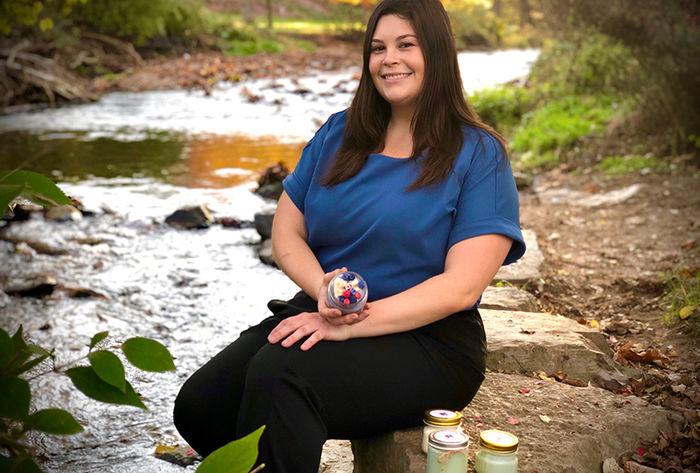 Corina Piller, with one of her soy wax candles.

With candle names like “Fruit Loop Cereal,” “Breakfast at Tiffany’s,” “Blueberry Cobbler,” and “Fall Leaves,” Piller has a candle for every season and taste. Her candles are 100% soy, which is important to her because they leave a low carbon footprint. They are also biodegradable and a renewable resource, and they burn longer and cleaner than traditional paraffin wax candles, she explained.

Pillar said her Penn State Berks education has been a key part of her success. Her communication arts and sciences degree, along with minors in both professional writing and English, helped her to gain confidence in public speaking and forming connections with others, while focusing on the tasks at hand. She also attributes her advertising and creative blogging skills to the “Intro to Advertising” and “Writing for the Web” classes she took at Berks.

“Without my CAS professors’ encouragement, care and time, I would have never delved into my new found love for research," she added.

Piller has always had a flare for the creative. In fact, she was taking painting classes at the GoggleWorks Center for the Arts when the pandemic made it necessary for the center to close for a few months. Since she didn’t have access to her paints, she started looking for another way to channel her creativity.

At that same time, Piller was working remotely for a real estate agency and enjoyed burning candles while she worked. The only problem was there were no candles available at retailers during the height of the pandemic. So she took matters into her own hands, ordering wax, wicks and oils from Amazon, while studying reputable blogs and watching YouTube videos on the candle-making process. Soon she was making her own soy candles from her West Reading home.

“I've always had a love and obsession with candles since I was little but I never thought about making them,” Piller stated.

A display of Corina Piller's candles.

First, Piller provided candles for a friend’s wedding and as favors for a bridal shower. Another friend, Katherine Shaner, owner of Little Hands Therapy LLC, asked her to make 50 mini candles for her monthly subscription boxes. Piller also worked with Penn State Berks alumna Sahiba Bhasin, class of 2013, to create 120 candles to send overseas in care packages to our troops.

Despite the ongoing pandemic, she recently had her first show and provided candles to a realtor friend for an open house. She also has an upcoming event in the works with Shaner, where her candles will be featured. As of July, Piller’s candles are in their first retail space within BLDG. 7 Yoga in Wyomissing, Pennsylvania.

The orders kept coming in. Since she already had created an Etsy shop, ShePaintsCo, to sell her paintings, she began advertising her soy candles online and promoting her new niche with skills learned through her time at Penn State Berks. What began as a creative outlet for her personal enjoyment turned into a lucrative business. In fact, she recently resigned from her job to pursue her business full time.

She made connections with mostly local vendors — Keystone Candle Supply in Middleburg who supplies her vegan, cruelty-free fragrances, and Filmore Container in Lancaster, Pennsylvania, who receives their soy wax from a farm organization in Kentucky. Piller explained that she likes to support farmers, especially since her family owns a farm in Indiana.

“When my stuff arrived, I went to town and my mind exploded with ideas. I got glitter, dried flowers, different crystal glass and mason jars from local vendors and started experimenting and having fun,” she stated. When asked what she would tell aspiring entrepreneurs, she said, “If you have a feeling in your gut for something you want to do, go for it!”

Custom requests do not intimidate her. She commented, “I am constantly inspired by requests from friends and customers; it helps me to push my creativity into a new space and encourages me try new things.” She added that she is currently developing a new winter fragrance line for the holiday season.

Piller states that her parents encouraged her creativity from an early age, enrolling her in classes at the Yocum Institute for Arts Education in West Lawn and in the gifted art program at Lorane Elementary School. She credits her late father, who she says was creative in his job as a chemist. Now she is using her creativity – as well as chemistry – to make candles.

Her love of learning new things and researching new ideas has not ended since Piller graduated, and it has helped her to realize her dream of being her own boss.