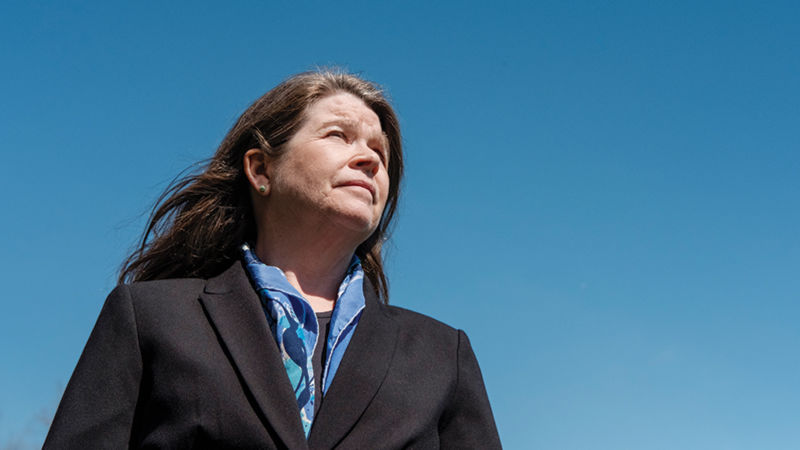 The BIG Picture: Finding our Place in the Universe

Dr. Ruth A.  Daly, Professor of Physics at Penn State Berks will conduct research at the Flatiron Institute, which is funded by the Simons Foundation. This support will help underwrite her year-long, 2019-2020 sabbatical to expand her theoretical astrophysics and cosmology research of the universe and objects in the universe, with an emphasis on black holes and the acceleration of the universe.

A member of the college’s faculty since 1999, teaching physics and astronomy and a pioneer in her discipline, Daly’s research is focused on the properties of black holes, the formation and evolution of structure in the universe, and the evolution of the universe itself, such as the expansion and acceleration histories of the universe.

The mission of the private Simons Foundation, New York City, is to advance the frontiers of research in mathematics and the basic sciences, including physics. The foundation exists to support basic–or discovery-driven–scientific research undertaken in the pursuit of understanding the phenomena of our world.

Daly will be working at the foundation’s Flatiron Institute, also in New York City, which advances scientific research in astrophysics, biology and quantum physics through computational methods, including data analysis, modeling and simulation.

An Exciting Time for Her Fields

Daly stated that this is an exciting time for the fields of astrophysics and cosmology as we try to find our place in the universe, and these fields are alive and well at Penn State Berks.

“What do we mean by ‘astrophysics’ and ‘cosmology,’ and how do they impact the community and the world? Astrophysics involves the application of physics to astronomical objects, such as galaxies, black holes, stars, planets, and everything else that is in the universe,” she explained, adding that cosmology is the study of the properties and history of the universe itself.

Daly said that she is currently concentrating on the acceleration of the universe and the properties of supermassive black holes, astrophysical objects that are currently the focus of many studies including those at Penn State Berks.

“You may think of a black hole as an object that does not emit any light–-so how can a black hole be studied? As stars and gas get close to a black hole, stars begin to orbit the black hole very rapidly and gas is heated to very high temperature. If we find stars orbiting a region very rapidly but we don’t see emission from anything inside the stellar orbits, then we can conclude that there must be a black hole there, and the mass of the black hole can be estimated,” said Daly. 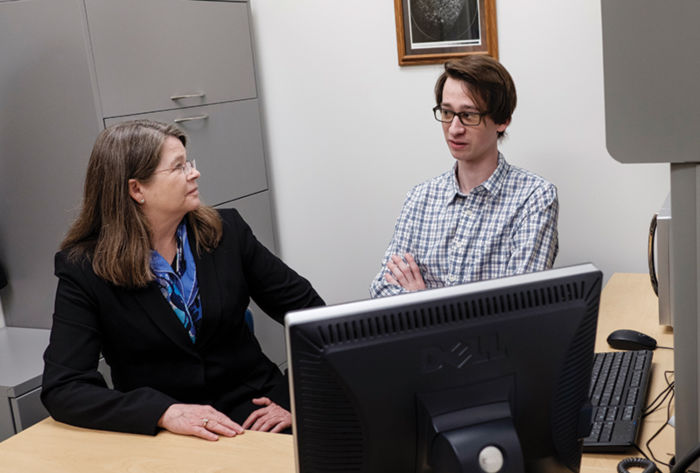 Dr. Ruth Daly works with students on her research. She is pictured with Trent Barbusca, a junior majoring in Aerospace Engineering.

Daly noted that gas can also find itself near a black hole; in this case, one can see very hot X-ray emitting gas orbiting a region with–nothing visible inside the ring or disk of hot gas!

Sometimes, very powerful jets of material get flung from the area close to a black hole, and these can be studied with radio telescopes and interferometers, such as the National Radio Astronomy Observatory Very Large Array (VLA) in New Mexico and the Giant Metrewave (sic) Radio Telescope (GMRT) in India.

She said that she and her collaborators have been fortunate to be awarded significant observing time at the VLA and the GMRT.
Daly uses data gathered from extragalactic radio sources to understand the properties of black holes, such as their rate of spin, as well as to study the global geometry and expansion history of the universe.

The strong radio sources, Daly said, can be used to study the global geometry and history of the universe, in addition to helping us to understand the properties of black holes.

Exploring Ages of the Universe

Daly frequently includes students on research projects, many of which result in publications with students as co-authors. Her research findings also have received numerous citations from scientific colleagues.

She said students involved with research projects at Penn State Berks develop valuable transferable skills such as the ability to collaborate and work with others, to search and test for systematic and other types of errors, and to describe and explain their results. Students also gain familiarity with a variety of computer environments and software packages.

Most recently, Daly discovered a tenfold increase (from 100 to 1000) in the number of sources for which magnetic field strengths and black hole spins could be determined, which she described as a “huge advance and a breakthrough paper.” She will present those findings at a conference at the Aspen Center for Physics in Colorado in March 2019.

“It is fascinating to think about the universe and rewarding for me to have an impact with my research.” In terms of important problems today, “finding a signal of life on another planet would be huge, as would be determining what constitute the dark energy and dark matter that make up about 95 percent of the universe—only about five percent is normal matter (atoms, electrons, neutrons, etc.) that we can see,” Daly said.