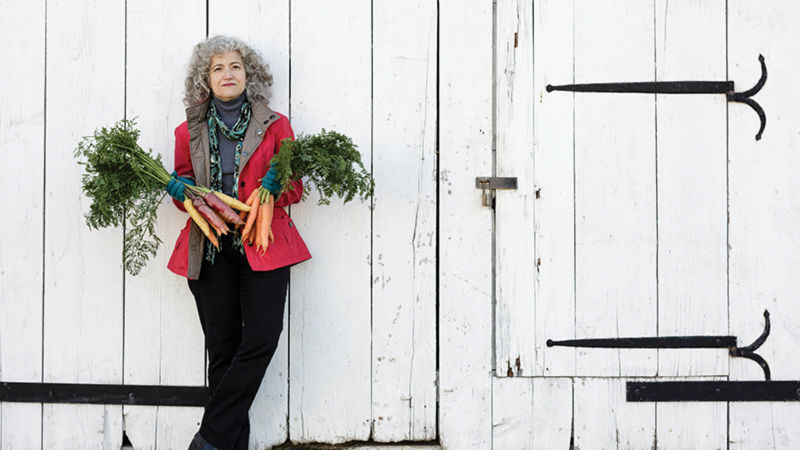 Chances are that you don’t think about industrial agriculture and its effect on the environment and local farming when you’re going through the drive-through of your favorite fast-food restaurant.  You are hurriedly trying to grab a bite during your lunch hour or before getting the kids off to soccer practice, so it probably doesn’t occur to you that your choices may be hurting local farmers, not to mention your own health and well being.

Dr. Michelle Mart’s research focuses on studying the effect of cultural attitudes about the environment and the food industry in the United States, from the mid-twentieth century to present day. Her book, Pesticides, A Love Story: America’s Enduring Embrace of Dangerous Chemicals (University Press of Kansas, 2015), examined why Americans cling to their love of pesticides despite warnings, rising costs, and declining effectiveness.

She is now embarking on a new book, which will take off from where Pesticides left off by looking at food itself, and how cultural expectations and government policies affect U.S. food systems and what people choose to eat.

According to Mart, government food policies, nutrition guidelines, and school lunch programs all shape what its citizens eat. She explains that historically school lunches were often based on surpluses produced by large monocrop agriculture. Using these surpluses was a conscience decision against using food produced by local agriculture.

Mart says another example of the impact of government food policies is seen in the nutritional guidelines on how much and which types of food the average person should eat.  These guidelines reduce food to a set of nutrients, instead of understanding that it is a reflection of our culture and identity.

In addition, certain food industries–such as dairy farmers and cattle producers–have powerful lobbyists who are able to affect nutritional guidelines and the language used in those guidelines. One example is the recommendation to “choose leaner meats” rather than to avoid eating red meat entirely.

Government agencies such as the FDA rely on the data provided to them by the food industry and pesticide manufacturers, rather than conducting their own independent research, and they make rulings based on that data.

Mart practices what she preaches, shopping at local farmers’ markets and eating an organic and sustainably grown plant- and grain-based diet as often as possible.

“The idea of cheap food has become a cultural expectation,” she comments. “But food should be expensive. You can spend less on other things, such as your Netflix subscription, your cell phone bill, or clothing.” She clarifies that food only appears to be cheap when many of its costs are externalized, such as its environmental impact, the exploitation of agricultural labor, and its effect on consumers’ overall health.

Mart goes on to state that unfortunately, not everyone has the same access to high quality food. The system is skewed because the government and food industry subsidize processed foods.

“McDonald’s food is so cheap in part because of government subsidies,” she explains. “The government supports water rights for the cattle, they look the other way when the feed lots don’t regulate methane gas, and so on. All these factors combine to make McDonald’s a cheaper option than organic, sustainably raised food. Over time, our bodies have adapted to eating this type of processed foods. It’s become interwoven into our way of life and incredibly hard to change.”

One of the themes of Pesticides and her current research is the idea that we have continued to embrace the use of pesticides, even with all the examples of their adverse effects.

The book evolved during a research fellowship Mart was awarded by the Rachel Carson Center for Environment and Society in Munich, Germany, in 2012 to explore the cultural history of pesticide use in the United States from 1945 to the present.

“When Rachel Carson wrote Silent Spring, the media and the public focused on the evils of DDT. Within 10 years, DDT was banned, as well as other chemicals in the same class. The government substituted different pesticides for DDT rather than questioning industrial agriculture based on pesticide use.”

Mart was fascinated with the paradox that Silent Spring changed so much about how the public viewed DDT and the environment, yet after its publication, pesticide use increased in the United States.

The effects of the embrace of chemical technology to manipulate the environment are hidden. People don’t think about the true causes of obesity and disease, and the number of people suffering from obesity-related illnesses continues to rise.

Mart advocates for the Precautionary Principle, which states that that the introduction of a new product or process whose ultimate effects are disputed or unknown should be resisted. She cites the hidden costs of our current system, such as ground water contamination, greenhouse gases generated by fossil fuels used to make pesticides, and ultimately disease and death.

Furthermore, she states that the U.S. is on a “pesticide treadmill”: Pesticides have been proven to lose their effectiveness with heavy use, so chemical manufacturers produce new pesticides. We stay on the treadmill because consumers want cheap food and pesticide manufacturers and the food industry want huge profits.

“It’s important and fundamental to make sure people get adequate nutrition,” she states. But Mart suggests that there are other ways to do that instead of our current food system. Mart also states that currently, 40 percent of the food we grow is wasted, whether from harvesting practices which routinely discard blemished foods or parts of plants, food not consumed at restaurants and discarded in grocery stores on “sell by” dates, the contents of our refrigerators, and the list goes on.

And what about all the organic options that are in our grocery stores? Mart states that there is an illusion that we are improving our system with the rise of organic food. But are things really improving? “Yes and no,” she answers. “Yes, because any time we lessen the use of chemicals on the land, it is good. No, because some organic food is industrially farmed and some companies use ‘exempted ingredients’ to process food.”

As a cultural historian, Mart is concerned with how our general views – on various topics – affect our attitudes and actions in specific areas. Her research has evolved from a focus on foreign policy and culture to a focus on the environment and culture.

“Since before graduate school, I have been interested in how we construct our world in the stories we tell ourselves. People’s understanding and actions are based on these stories.”

Her first book, Eye on Israel: How America Came to View Israel as an Ally (SUNY Press, 2006), examined American culture and U.S.-Israeli relations since the Jewish state’s founding in 1948.

In addition to her research and publishing, Mart also works with students on projects that relate to cultural narratives. “I use my research and experience to inform my teaching,” she explains. By doing so, she gives her students food for thought.