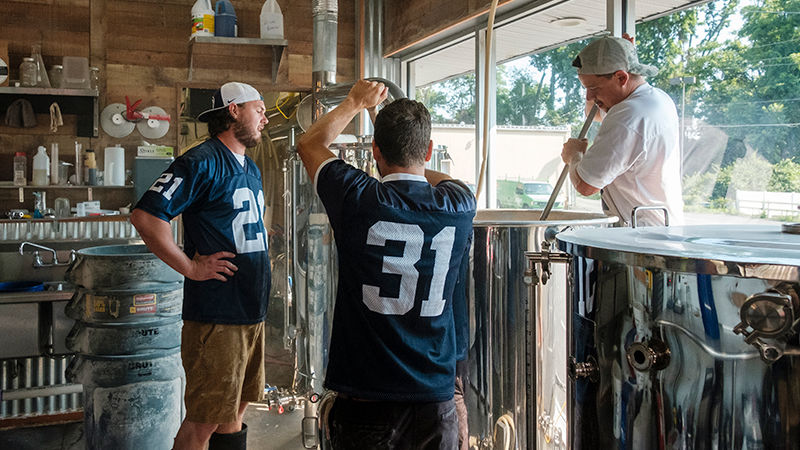 Lifelong Friends Turn Their Love of Brewing Into A Business

A group of best friends and Penn State Berks alumni work together to create a thriving business, Schaylor Brewing Co., in the heart of Berks County.

It’s 8 a.m. Josh Taylor and Lucan Schmidt, the co-founders of Schaylor Brewing Company, have already arrived at their Shillington brewery to prepare for the day, which may last until midnight or later. Running your own brewery is hard work, but they wouldn’t have it any other way.

Three days a week, you can catch Taylor “mashing in” early in the morning while Schmidt works on the books. On this day, Taylor gave us a crash course in the art of beer making while he worked. It’s a hot and tedious process in which milled malt is transferred to a “mash tun,” where it is steeped in 150-degree water. This causes the enzymes to break down the long starches in the grain and convert them into simple sugars, making them fermentable. These simple sugars then become alcohol.

Taylor is very knowledgeable about brewing but it wasn’t his first career choice. He graduated from Penn State Berks with a B.S. in kinesiology and a minor in business. After graduation, his plan was to take a year off to earn some money before pursuing a graduate degree in physical therapy.

During that time, he and his brother-in-law–and one of his best friends–Lucan Schmidt, also a Penn State alumnus, kicked around the idea of starting their own brewery. They drew up a business plan and put the numbers together and soon it became evident that their dream could become a reality. And they haven’t looked back since.

“I have always been a beer lover and I did some home brewing,” states Taylor, whose first job was at Reading Soda Works and Carbonic Supply, which sells home brewing equipment.

Schmidt and Taylor were the two original founders of Schaylor Brewing Company (the name “Schaylor” is a combination of their last names). They were joined by partners Joseph Mastruzzo and Martin “Marty” Wolfskill, another Penn State alumnus. (There are eight owners in total; the other four are silent partners who live outside Berks County.)

Nate Wolfskill (Marty’s brother) and Mason DeForge, both Penn State Berks alumni, work in the kitchen, along with Zack Taylor, Josh’s brother. Lucan’s cousin and sisters work at the brewery too. All in all, there are about 15 employees at Schaylor Brewing Company. Many are family members or lifelong friends who have known each other since their days at Conrad Weiser High School.

And let’s not forget Riley, Taylor’s golden retriever. She goes to work with him every day, but never gets in the way. She even has a beer named in her honor, “Roo’s Brew.” 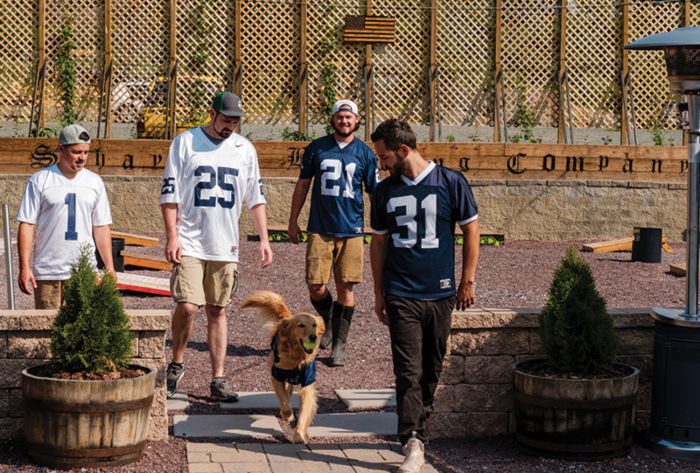 Schaylor Brewing Company opened its doors on Thanksgiving eve 2017. The partners acquired the building, a former Daewoo car dealership turned mixed martial arts studio, in December 2016. The building’s large open layout appealed to them because it provided the opportunity to showcase their brewing equipment in the front corner, where it’s visible to customers in the seating area. People driving by can also see it through the large windows. Taylor, head brewer, encourages customers to sit at the side bar to watch and ask questions as he brews.

Despite its appeal, the building needed some work and the partners rolled up their sleeves and got started on the renovations right away. “We learned a lot about construction in a very short time. Pretty much everything you see cosmetically, we did ourselves–from the corrugated metal on the walls to the open duct work,” states Taylor.

Their brewery has a rustic, homey feel with a U-shaped bar and additional table seating, as well as a patio in the back complete with an area for Cornhole, Kanjam, and Spikeball competitions. Taylor explains that they wanted the brewery to have an open, social atmosphere and to be a place where people want to hang out. 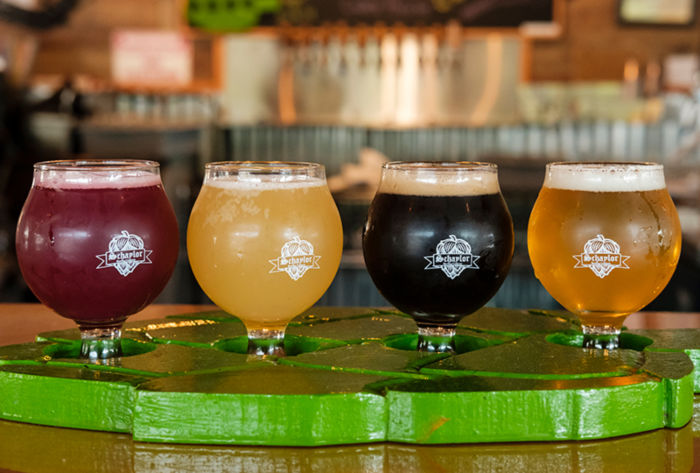 Brewing Outside the Lines

Schaylor’s motto is “brew outside the lines,” so many of their beers are nontraditional. They brew a lot of “one-offs,” a lot of fruit beers and sours, and India pale ales (IPAs), which are the most popular. Their beer menu is always changing. And their brews have fun names based on movies, music, and pop culture, from “Pineapple Express,” a pale pineapple-flavored ale, to “S’moreo Speedwagon,” a Stout with graham cracker, Oreo cookie, cocoa, cinnamon, and vanilla.

Since they are big fans of IPAs, many of their beers are “hoppy” but they serve a variety including Stouts and Belgians. They even made their own hop-shaped flight boards, which are so popular that customers often ask to buy them.

“We are super passionate about craft beer,” states Taylor. “We want every customer to be able to come in and find a beer that they like–one that will put a smile on their face.”

All of Schaylor’s beer is brewed on site, and on a typical day, they have 10 different beers inside and outside on the patio.

In addition to beer, Schaylor’s Brewing Company serves cold brew coffee and kombucha. And they have a “cold” kitchen with induction heat that serves paninis, flat bread pizzas, oven-baked wings and fries, as well as stuffed pretzels and salads.

The four local owners wear many hats but for the most part Taylor and Wolfskill do the brewing, while Schmidt and Mastruzzo handle the financial aspects of the business and coordinate events, such as Brew Yoga one Sunday a month. They also get involved in community events such as the annual Dogs & Brews event at the Reading Public Museum to benefit the Animal Rescue League.

And Taylor hasn’t forgotten about his alma mater: The Berks County Chapter of the Penn State Alumni Association held a mixer at Schaylor Brewing Company and the college’s GOLD (Graduates of the Last Decade) Reunion was held there during the 2019 Homecoming Weekend.

Taylor has fond memories of Penn State Berks and he states that even though he didn’t follow his original career path, he learned a lot during his time at the college, from the chemistry lessons that came in handy when he was learning how to brew, to the business courses that helped him to establish and run the company. “I don’t think I could have done it without going to Penn State Berks,” he states. “Just the discipline you get from college is invaluable when you start your own business.”