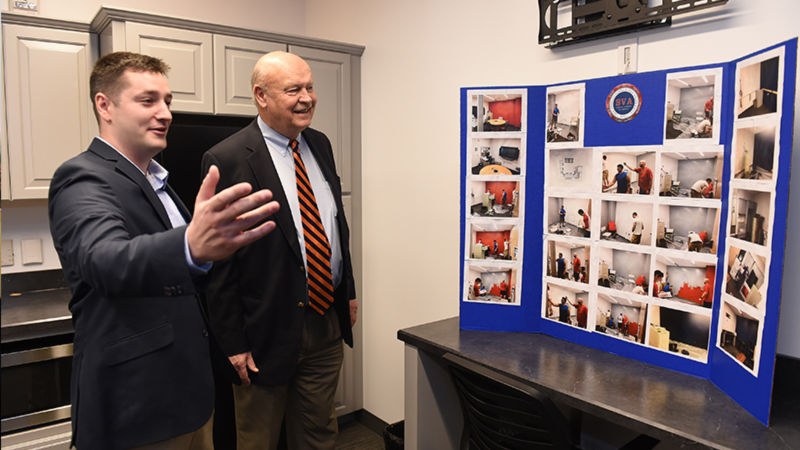 Walking onto a college campus after leaving the military can be an uncomfortable experience for student veterans. To help remedy this issue, Penn State Berks has dedicated space for an Adult and Veterans Lounge on campus to help veterans feel more connected on campus. The grand opening was held on Friday, Jan. 13, 2017, with a brief ribbon-cutting ceremony at 9:15 a.m. in room 325 of the Gaige Technology and Business Innovation Building.

Chancellor R. Keith Hillkirk and officers from the college’s Student Veterans Organization were present to cut the ceremonial ribbon and officially dedicate the space.

The SVA chapter at Penn State Berks received a $10,000 grant from a Vet Center Initiative funded by The Home Depot Foundation and Student Veterans of America (SVA) in May 2016 after applying and submitting a business plan. The Berks SVA members then worked with school officials to select the location of the center and completed much of the remodeling work that turned the room into a lounge for student veterans. 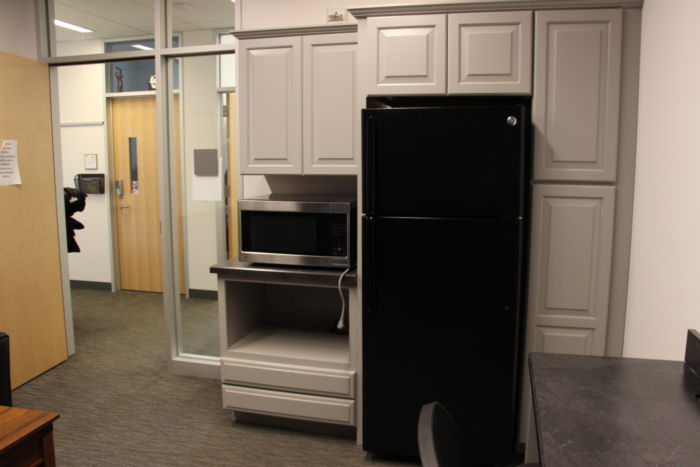 According to Joseph Webb, Director of Student Support Services and adviser to the SVA chapter, the college used the funding to purchase new furniture, a television, a refrigerator, and a microwave, as well as to renovate the space with a new coat of paint, and ultimately create a home-away-from-home for student veterans.

“Since many veterans commute to school, have jobs, or juggle other responsibilities, having a place on campus to connect to other veterans and resources can be invaluable,” stated Webb. “As a student organization dedicated to supporting veterans, the SVA officers wanted to create a veteran center on campus to support their fellow veterans, while also leaving a legacy of service to future Penn State Berks student veterans.”

Webb added that the campus currently serves 160 veterans and their dependents. With the new Veterans Lounge, student veterans have a space where they feel comfortable going between or after classes to study, eat lunch, socialize with other veterans, and learn about things like the GI Bill, and VA benefits and health care. The space is manned by one of the two Penn State Berks students who have VA work-study positions on campus and can offer guidance and expertise on those subjects.

SVA Chapter President Mark Bennett, an Air Force veteran majoring in Electro-Mechanical Engineering Technology, said sometimes it can be hard for veterans to relate and socialize with other students because their backgrounds are so different. For those who have recently returned from combat or who have PTSD it can be especially uncomfortable, he said. The student veterans center is a place they can go to get a break during their school day or to spend time with fellow veterans, he added.

"It's nice to have a support group," he said. "That's what they'll have here."

In addition to student veterans, the space is open to all adult learners on campus.

Student Veterans of America and The Home Depot Foundation teamed up in 2014 to launch the Vet Center Initiative, offering SVA chapters a chance to compete for up to $10,000 in grant money to build or renovate a veteran center. By 2015, 61 campuses earned $500,000 to build or rehabilitate veteran centers that benefit more than 30,000 student veterans. In 2016, 50 campus communities were awarded grants of up to $10,000.

ABOUT STUDENT VETERANS OF AMERICA: SVA is a 501(c)(3) nonprofit coalition of more than 1,300 student veteran chapters, representing over 540,000 veterans in higher education across the country. SVA's mission is to provide military veterans with the resources, support, and advocacy to ease veteran and active military students' transition into higher education and leverage military experience to launch successful careers in high-demand fields after graduation. For more information, visit www.studentveterans.org.