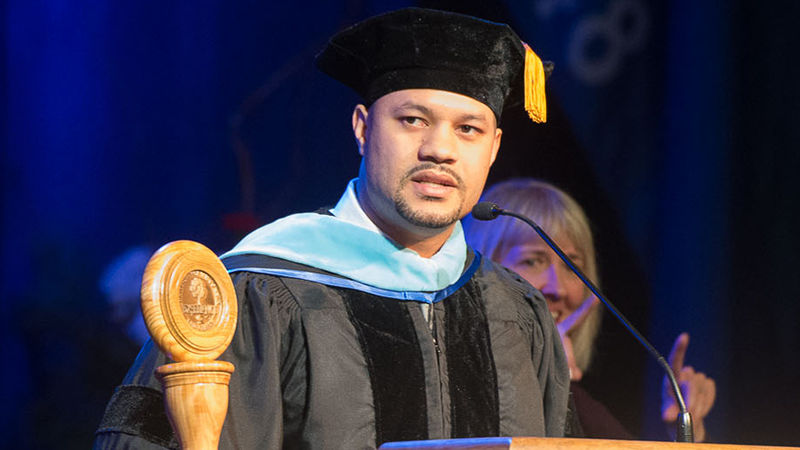 The director of student affairs' efforts have helped to create the welcoming environment that so many Penn State Berks multicultural students refer to as their “home away from home.”

“I am humbled to receive the John Romano Faculty/Staff Diversity Recognition Award. I look at the award as a collaborative effort. It reflects the entire college’s commitment to diversity and the hard work of all the faculty and staff at Penn State Berks,” comments Webb.

At Penn State Berks, Webb is very engaged with multicultural students. He founded and serves as adviser to the Men of Excellence student organization, a group for Black and Latino male students, two populations with the highest college drop-out rate. The organization’s mission is to increase retention by providing the connection, resources and support for its members to achieve academic excellence.

In addition, Webb serves as the co-chair of the college’s diversity committee, which is comprised of a cross-section of college faculty, staff, and administrators. He is also a member of the University’s Forum on Black Affairs. He served as president-elect of the Pennsylvania Black Conference on Higher Education from 2015–16.

Outside Penn State Berks, Webb is active in the local community. He volunteers with the Mentors for Berks Youth program, where he works with middle- and high-school students. He also volunteers to work with youth at Bethany Children’s Home. Working through Penn State’s Fostering Lion’s Program, a new program designed to support foster youth at Penn State, the college will welcome its first FLP student this fall due to the efforts of Webb and his team.

Teamwork is important to Webb. At Penn State Berks, he implemented an initiative to highlight campus employees who excel in supporting an inclusive environment.

Presented by the Multicultural Resource Center at Penn State, the Romano Award recognizes permanent faculty and staff from Penn State who have consistently promoted multiculturalism and demonstrated concern for and sensitivity to the needs of multicultural students at a level above and beyond their job responsibilities.

His efforts have helped to create the welcoming environment that so many Penn State Berks multicultural students refer to as their “home away from home.”