Siegel, of Red Hook, New York, and volunteers worked over 175 hours in one week, using hundreds of pounds of recycled materials and bamboo, which is native to the campus. With over 53 public art projects to date, the artist has installed commissions at museums, sculpture parks, and college and university campuses throughout the country. Siegel and volunteers,  largely students who had never worked on any art project before, created two large, cylindrical shaped objects. These objects are eleven feet tall and ten feet long, with a radius of approximately six feet. The exterior of the two pieces is covered with bamboo, and the end slabs are stuffed with recycling. The work, titled "Two of em," is dynamically sited, as though in dialog.

The Freyberger Gallery, Penn State Berks; the Freedman Gallery, Albright College; and the Goggleworks Center for the Arts, Reading.

The exhibition Wonderful Life is a collection of 52 sculptures by artist Steven Siegel. The exhibition, with its seminal showing at the Turchin Center for the Visual arts, Appalachian State University, North Carolina, was curated by Hank Foreman, Assistant Vice Chancellor for Cultural Affairs and Director and Chief Curator for the Turchin Center.

A selection of the work was exhibited in three Berks County venues: The Freyberger Gallery, Penn State Berks, the Freedman Gallery, Albright College, and the Goggleworks Center for the Arts, with a formal lecture by the artist at the Reading Public Museum.

Marilyn J. Fox, director of the Freyberger Gallery, Penn State Berks, has coordinated this exhibition to produce a county-wide opportunity for individuals to experience the monumental scope of this exhibit.

Oct. 2010 Four artists from across the eastern United States will exhibit their versatile mastery of encaustic art beginning October 28th. Selected by Kristen Woodward, artist and instructor of painting at Albright College, who has mastered the technique of encaustic painting, the artists include: Bryan Lafaye of Lafayette, LA; Bonnie Levinthal of Philadelphia, PA; David Mohallatee of Richmond, KY and YoMarie Silva of Miami, FL. Encaustic is a simple blend of pigment & wax. Ancient peoples and cultures, including the Eqyptians, used this seductive medium that both obscures and reveals imagery. Throughout the centuries, artists have modified the recipe to include alternative pigments, oil, paraffin or soy wax to coax out different properties. Fusing the finished surface completes the alchemy. 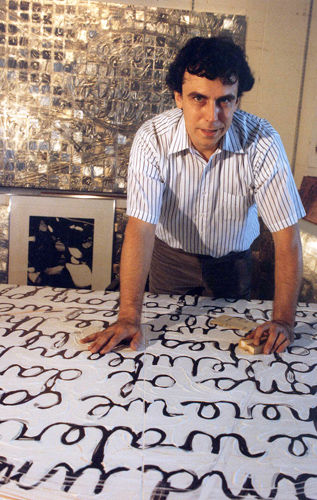 Robert Ian Pepper?s scope of work is linked less by imagery, style or media, and more by character, passion and drive. From his earliest street chalk drawings, done in the ?80?s in his native Manchester, England and later on this side of the pond, through his progression of still life, constructions, geometric art, and portraits, energy links the work.

In this exhibition ? ?25 Years of Portraits in Berks? ? Pepper brings out a collection of commissioned portraits, paintings of friends, or clients. He has done portraits for thirty odd years, from the street drawings to assertive and energetic paintings of families, children and associates.

The Our OWN exhibitions hosted every year or so, began in 2007 with an exhibition of our faculty and staff's artwork. The second Our OWN(II) featured area artists who received their degree in art from Penn State, Main Campus. Our OWN III highlights newly identified students from Main Campus and includes those who are also teaching art and/or working in the field.

Our Own III featured David Love, a printmaker/painter and an art instructor at the Germantown Academy; Kelly Kehs, a painter exploring color, form and space ; Sarah Moffat, a printmaker; Veronica Winters, a PA Council on the Arts artist in residency who also studied at the Arts Student League in New York City; and Justin Staller, art instructor at the Rochester Institute of Technology.

Jeff Waring is the director and 20 year member of Highwire Gallery?one of the the first co-op galleries in Philadelphia, formed in 1988. The gallery was established to include, rather than exclude, artists who work with experimental techniques, alternative media, and who otherwise don?t fit into the mainstream gallery scene ? and Waring fits the bill. In creating art, Waring?s influences are in constant flux ? from rust and erosion, to live music and time, nothing is fixed. Waring?s art explores the non-tangible.