History of the Wyomissing Polytechnic Institute 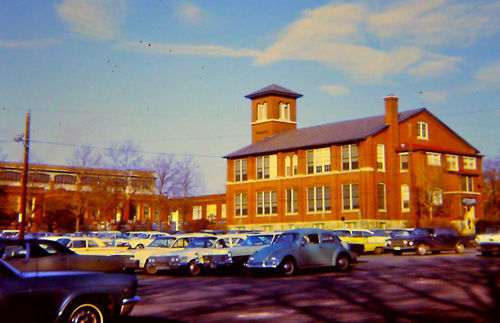 The Wyomissing Polytechnic Institute, founded by Ferdinand Thun and Henry Janssen, was originally organized as the Educational Department of the Textile Machine Works.

Textile Machine Works, the world's largest manufacture of full-fashioned hosiery machinery, was one of three companies that formed the Wyomissing Industries, founded by Ferdinand Thun and Henry Janssen. The Industries were located in Wyomissing, a beautiful suburb of Reading , Pennsylvania. The two other companies were the Berkshire Knitting Mills, America's largest producer of full-fashioned hosiery, and the Narrow Fabric Company, manufacturer of diversified narrow fabric goods such as lacing, tapes and braid. The facilities of these companies were available to students as practice laboratories.

Textile Machine Works' apprentice program, which had been established long before, was expanded to include a technical course, and thereby to meet a growing need for men trained in both the theoretical and practical aspects of modern shop practice. A two-year course was offered covering both these needs, with two groups of apprentices alternating between the show and school at two-week intervals.

School was conducted in the basement of the Dispensary Building. The first group of 16 students reenrolled on September 26, 1927, and a second group of 16 on October 10, 1927.

Twelve member of the first class, which completed it course in 1929, were employed by the Textile Machine Works.

In addition to the training of TMW apprentices, the school, soon after its found, opened its doors to other employees as well. A night school began on January 9, 1928 , in order to give all employees of the Wyomissing Industries an opportunity for additional education. Later, the general public was invited to attend. This service, starting with an enrollment of 22 students, eventually grew to more than 500 day and night school students and a faculty of more than 22 instructors.

The Night School was held in cooperation with the Wyomissing School District and the Extension School Division of the Pennsylvania State College now known as the Pennsylvania State University. Classes were conducted in any subject that ten or more students were interested in taking and was approved by the school's administration.

It was soon felt that the name Wyomissing Trade School better suited the activities of the school than its original name, and the change was made on January 27, 1928.

In three years the school had outgrown its quarters in the basement of the Dispensary Building. It moved to the former Sacred Heart Church building at 8th and Hill Avenues in Wyomissing on August 29, 1930. School opened in the new, altered facility known as the Classroom Building on September 2, 1930, with a total enrollment of 112 students.

In 1932 the school again extended its services beyond the training of apprentices for Textile Machine Works. It offered its program to neighboring industries which had previously trained their apprentices without the coordinated method of shop-and-school. These industries welcomed this opportunity to enroll apprentices in the Wyomissing Trade School. The first "outside" student was enrolled by the Carpenter Steel Company on August 29, 1932 . The number of cooperating companies grew to as many as 32.

With its facilities now serving employees of the Wyomissing Industries and apprentices of neighboring companies, the school adopted a name that was in accord with its broader scope. On March 6, 1933, the Commonwealth of Pennsylvania, recognizing the school as a non-private educational institution, awarded a charter to the newly named school: the Wyomissing Polytechnic Institute. The charter bears the names of Ferdinand Thun, Henry Janssen, Dr. John E. Livingood, Hanns Gramm, and Arthur C. Harper as incorporators.

As the Wyomissing Polytechnic Institute, the curriculum was changed to a program lasting four years. Students alternated every four weeks for approximately two and a half years, and the remaining one and a half years were spent on the job, training in their selected field. The academic credits earned at the institute were recognized by most colleges and universities in Pennsylvania.

Students were selected carefully and had to give evidence of the physical and mental qualities necessary to cope with the intensive learning program. The prospective student had to be male, between sixteen and nineteen years of age and had to have a high school education or equivalent. He had to satisfy the medical doctors at the Dispensary that he was in good general health. Finally, he had to pass the examination conducted by the Wyomissing Polytechnic Institute to determine the quality of his preparation and his mental fitness.

If successful in meeting the requirements, the student was accepted and placed on probation for a period of six months.

Tuition was paid by the sponsoring company. However, books and supplies were the responsibility of the student.

It is interesting to note that from the early 1930's to about the mid-1940's when the students spent their required time in the "shop", they earned 25, 28, 30, and 33 cents per hour in their 1st, 2nd, 3rd, and 4th years respectively. It is also interesting to note that each student from Textile Machine Works was required to attend shop classes each Saturday morning without pay to learn how to handle a metal file. However, after successfully filing a metal cube, the student was student was given permission to make personal tools such as surface plates, hammers, vises, scrapers, screw drivers, and other small hand tools useful in the pursuit of his trade of profession.

During the depression years, the Wyomissing Polytechnic Institute's Trustees further extended the services of the school, this time to the community, with an offer of its facilities to students not connected with cooperating industries. The expanded program allowed young men of the Reading area to attend classes and receive the equivalent of two years of college at low tuition while living at home.

In order to assure these graduates proper recognition of their credits upon transferring, the Trustees applied to the Council of Education of the Commonwealth of Pennsylvania for recognition as an accredited junior college. Such recognition was granted on April 12, 1935.

The Junior Engineering College became available to students who desired to enter the field of engineering and to pursue a bachelor's degree. Graduates of the Wyomissing Polytechnic Institute Junior College typically received advanced standing in recognized engineering colleges in the United States , entering as juniors and receiving a full two years' credit. Credits earned in the Junior College were also recognized at other colleges for advanced standing in other fields.

The Junior Engineering College course was a series of five terms. The first year was divided into two terms of eleven weeks each with an alternating plan whereby each student spent four weeks in the classroom and four weeks in one of the local industrial plants, or received a local municipal placement at a library, airport, or courthouse, where a practical knowledge of his studies was acquired.

During the second year, the student spent the entire year of three terms of fourteen weeks each continuously in school.

Junior College students had to pay their own tuition which was considerably less than the cost of tuition at other colleges. Students were also responsible for their books and supplies.

Enrollment at Wyomissing Polytechnic Institute increased rapidly during the years 1935-1940, reaching a maximum of 257 in 1939. The faculty also grew, with 18 full-time instructors in 1940. Chemistry, physics, and electrical laboratories were moved to a separate building known as the Laboratory Building, on February 12, 1934, to accommodate the increasing number of students. The building was also further remodeled during the summer of 1934 to expand the facilities of the school once again.

The beginning of World War II caused a significant reduction in the school's activities. Nevertheless, to the credit of the Institute and its leaders, new students were constantly being enrolled during this critical period. Some of the classes formed during these years were comprised of student who did not finish high school. With an altered curriculum, theses students matriculated on a high school level and received their high school diploma as well as the Institute Certificate upon completing the WPI program.

Many of the students enrolled during the war years enlisted or were drafted and returned after serving in the armed forces. The peak in post-war enrollment came in 1947 when enrollment reached 214 student apprentices. Thereafter, the average enrollment was 130 students with a faculty of nine.

During the 1950's, another service was extended to the community. A refresher program was offered to persons who desired to obtain their state licenses in engineering. Courses in electrical, mechanical, and industrial fields were taught by men who were WPI graduates.

In 1956 the Wyomissing Polytechnic Institute received national accreditation when the Engineer's Council for Professional Development approved its program. In order to qualify for accreditation, the Wyomissing Polytechnic Institute was evaluated by a visitation team composed of outside professional persons who inspected the physical plant and reviewed the qualifications and experience of members of the faculty, scholastic work of the students, and the records of graduates in industry.

The Engineers Council for Professional Development endeavors to serve industry and the engineering profession by promoting the qualitative development of education in engineering and engineering technology. They found an excellent program in the Wyomissing Polytechnic Institute.

The year 1957 brought profound change to the Textile Machine Works. The fashion trend toward seamless hosiery brought an end to the great era of full-fashioned hosiery leaving Textile Machine Works without a major product and causing many inevitable changes. An austerity program was undertaken and the Wyomissing Polytechnic Institute was terminated in May 1958 for economic reasons.

They Wyomissing Polytechnic Institute had completed an era of service (1927-1958) with excellence in terms of its practical purpose and a fine tradition of cooperative work-study education. The various services it offered to the community and cooperating companies over the years were vital to the productivity and economy of Berks County .

Because of the WPI record, its fulfillment of a continuing education service, and its convenient location, the Textile Machine Works recognized an oncoming void in local technical education. In 1958 Textile Machine Works offered the educational facilities of the Wyomissing Polytechnic Institute to Penn State University for the establishment of a University Center in Wyomissing.

After carefully evaluating the local needs, the support of business, labor, education, industry and representative local opinion, the Penn State University Board of Trustees accepted the invitation to establish the Penn State Wyomissing Center .

The name was changed in 1962 to the Berks Center. After a number of expansions in and around the Wyomissing Polytechnic Institute site, the school moved to an attractive 106 acre site in Spring Township, Pennsylvania . A full evolution had taken place and the Berks Campus of the Penn State University was born.

Today, Penn State Berks still maintains the WPI emphasis in technology and engineering, offering associate and bachelor degree programs in a variety of engineering fields. In addition, the Berks Campus offers eight associate, eleven bachelor, seven minors, and the first two years of study in more than 180 bachelor degree programs. Expanded to 258 acres, the Berks campus now serves more than 2,471 students, with a resident population of 804. The Berks Campus continues to serve the educational needs of the community as did its forerunner, the Wyomissing Polytechnic Institute. The Berks Campus is continuing these traditions in the 21st century.